THE THIN MAN vs "Today's Audience" 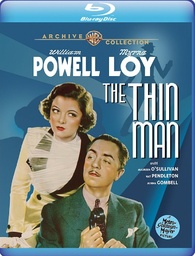 "That was then,” they might retort, arguing that movies of another generation wouldn’t pass muster with “today’s audience.” I love it when people throw that term around, as if “today’s audience” - the same generation that made Adam Sandler a multi-millionaire - are somehow more discriminating and sophisticated.

But I get it. The movies of my own generation are generally my favorites, too. And even as much as I love checking-out the classics (i.e., those made before I was born), my assessment often considers the era of when a film was made. The Thing from Another World is wonderful 1950s’ sci-fi, but I wouldn’t dream of comparing it to John Carpenter’s 1982 version.

Then there are movies like The Thin Man. This classic comedy-mystery isn’t simply amusing for a 75-year-old movie. It’s as sharply-written, witty and laugh-out-loud funny as any movie, regardless of decade. Just like a great foreign language film quickly has the viewer forgetting they’re reading subtitles, The Thin Man is so consistently engaging that I find it hard to believe even “today’s audience” would care what color the bedroom drapes are.

Your ignorant friend who thinks Jaws is the shark’s name is probably right about one thing: A film like The Thin Man might not connect with “today’s audience” because it would be impossible to find two actors to play Nick & Nora Charles as perfectly as William Powell and Myrna Loy (and trust me, they’ve tried). As a husband & wife crime solving team, their onscreen chemistry seems effortless. The innuendo-laced banter between them is as funny, cute and charming as my wife and I always assume we are when trading good-natured quips. Elsewhere, the story is filled with a variety of quirky, interesting characters, including Asta, the Charles’ scene-stealing pooch.

Just like Psycho can still terrify, High Noon remains the perfect western and 12 Angry Men is as culturally relevant as ever, The Thin Man belies its advanced age with a great story, snappy dialogue and two main characters who aren’t your traditional onscreen couple. This is a must-own for classic film lovers and should be mandatory viewing for “today’s audience.” Best of all, there's five more where this came from. Here's hoping some of those are on Warner Archive's pipeline.

MEE-OW! LIKE BEING TURNED LOOSE IN A BIRD SANCTUARY.
Posted by D.M. Anderson at 9:53 PM