RELAXER: An Ode to Slackerdom 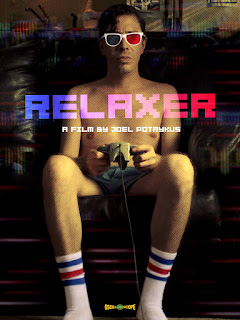 It’s 1999, a few months before Y2K (remember that?). Abbie (Joshua Burge) is a scrawny, sweaty, shiftless loser who lives in his brother’s squalid apartment. He does nothing but sit on the sofa in his underwear playing video games. His bullying brother, Cam (David Dastmalchian), frequently issues various ‘challenges’ to motivate him, none of which he’s ever completed.

As he prepares for the Y2K apocalypse, Cam offers Abbie one last challenge: reach level 256 of Pac-Man (which no one has done) without leaving the couch. He has until the new year to do it or he’ll be kicked out. Initially, the viewer assumes the year’s end is near, but after accepting the challenge, Abbie is on the sofa for months. A few acquaintances drift in-and-out of the apartment during this time, but he’s mostly alone, wallowing in his own filth as he goes to disgusting extremes to stay alive while adhering to the rules of the challenge.

That’s the basic premise of Relaxer, Joel Potrykus’ latest ode to slackerdom that bombards the viewer with obnoxious characters (including our repugnant protagonist), obsessive behavior and scenes calculated to trigger the gag reflex. Taking place entirely in a single room, the film is initially so meandering and abrasive that I was tempted to rage-quit a few times (especially during a needlessly protracted scene of one idiot demanding payment for soda).

However, there’s something about Abbie’s descent into savagery that’s morbidly fascinating, like watching a gruesome car accident in slow motion. The film also grows increasingly surreal, especially during the final act, when Abbie appears to have developed telepathic abilities (or maybe he’s simply delusional). While he isn’t remotely likable, we’re sucked-in by Burge’s predominantly physical performance, which can best be described as brave.

A love-it-or-loathe-it film, to be sure, Relaxer will obviously appeal to those already in-sync with Potrykus’ sensibilities. Others will dismiss it as a freak show, their patience severely tested. The attempt to appeal to the fringe crowd sometimes feels a little too calculated, but definitely leaves no middle ground.