MASTER Z and the Tenuous Legacy 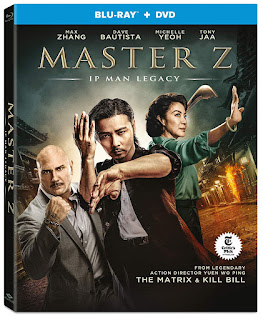 Fresh from having his ass handed to him in Ip Man 3, Cheung Tin Chi (Max Zhang) is ready to move on. Leaving martial arts behind, he seeks the simple life of a grocery store owner while raising his young son.

But life gets more complicated after he saves two girls from gangster Tso Sai Kit (Kevin Chang), who retaliates by burning down Cheung’s store. Their conflict escalates when Cheung torches Kit’s opium den. That-alone is enough story for a decent action film. Instead, Master Z, a spin-off of the popular Ip Man franchise, throws in a lot more plot than it really needs.

It turns out the local gang – the Cheung Lok - is actually run by Kit's older sister, Tso Ngan Kwan (Michelle Yeoh). She wants to end the organization's illegal activities and tries to de-escalate the rift between Kit and Cheung, to no avail. Kit further defies her by getting into the heroin business with American businessman Owen Davidson (Dave Bautista). As if that wasn’t enough bad guys, Tony Jaa pops in and out of the story to kick a few asses.

The continually shifting narrative is like a puzzle where the pieces don’t fit as neatly as they should. Subplots are introduced and later dropped, while the overall importance of certain major characters constantly changes (a few of them even turn out to be inconsequential). For example, Yoeh's character could easily be removed from the film with only a few minor script revisions and I still don't know Jaa's purpose. One gets the impression the film’s impressive cast was lined-up before concocting a story to fit ‘em all.

On the other hand, Master Z delivers action in abundance. As the only tenuous tie to the Ip Man franchise, Max Zhang is no Donnie Yen, but he’s a solid martial artist in his own right. He’s engaged in a majority of the fight sequences, squaring-off against most of the cast at various points. His showdown with Yeoh is a definite highlight, a virtual ballet of hands, feet and blades. At 56, Yeoh shows no signs of slowing down (though there is something unnervingly Joan Crawford-like about her appearance). Another great set-piece has Cheung taking-on several thugs among the neon signs hanging over a city street.

And ultimately, the action is what drives the film, its busy plot mostly serving to link the impressive fight scenes. Like The Bourne Legacy, it’s really an Ip Man film in-name-only and not nearly as character-driven. Still, martial arts fans probably won’t have many complaints.