FM and the Time Machine 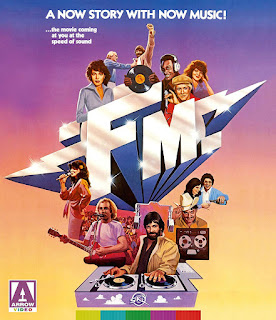 Revisiting FM for the first time since it briefly had the world’s ear in 1978 was like traveling back in time...in more ways than one. I remember Mom dropping me and a few friends off at the Southgate Quad for the day. Buying one ticket, we’d sneak from one movie to the next, something we did a lot back then (we called it movie hopping). Though we were always impressed with our own stealthiness, I doubt management really cared as long as we kept the concession counter busy.

While we weren’t there to see FM specifically, I walked out thinking it was cool enough to buy the soundtrack album. I probably forgot most of the plot and every character’s name shortly after leaving the theater, but Steely Dan’s title track was certainly stuck in my head during the entire ride home. Watching it now, it’s telling that during a pivotal moment in the story – when Q-SKY station manager Jeff Dugan (Michael Brandon) squares-off against company executives over a mandated increase in on-air advertising – the viewer doesn’t hear the actual argument. We see the conflict from another room while Tom Petty’s “Breakdown” is playing. Most of the film is driven by the music, sometimes cleverly, other times gratuitously (such as the concert scenes).

For a film probably created more to sell records than movie tickets (which it did), FM has arguably aged better than some other “soundtrack movies” of the era. It’s still definitely a product of its time, when FM radio was at its cultural peak. But unlike, say, Roller Boogie or Thank God It’s Friday, there’s some semblance of authenticity. This probably isn’t an accurate depiction of the radio business, but I do recall listening to quirky DJ’s with on-air personalities not unlike those in the film. Though episodic and (very) leisurely plotted, the performances are fairly engaging, their antics sometimes amusing. The only aspect that reeks of artifice – both narratively and aesthetically – is the ridiculous climax that has hundreds of fans rioting in the streets in support of the protesting DJs (who’ve barricaded themselves in the station).

The film's tagline, 'A now story with now music,' is 100% accurate. FM existed in the moment and was pretty-much rendered a period piece the second the '70s ended. As such, it’ll have zero relevance to the MTV generation. But for those raised on radio - or spent a significant portion of their youth movie hopping - revisiting FM is like climbing into a time machine, as it nicely captures the look and sounds of a bygone era.

EXTRA KIBBLES
"NO STATIC AT ALL” - An enjoyable interview with actor Michael Brandon, who has a lot of interesting anecdotes (and also claims to have written Starman).
"RADIO CHAOS” - Interview with screenwriter Ezra Sacks, who was somewhat inspired by his experience working at a radio station.
"THE SPIRIT OF RADIO” - Critic Glenn Kenny discusses the soundtrack. This guy comes across as a little arrogant and too impressed with him own opinions. He also gets a few of his facts wrong.
IMAGE GALLERIES – Stills, promo material and soundtrack LP/cassette/8-Track covers.
SEPARATE MUSIC/EFFECTS TRACK
TRAILER
SUPPLEMENTAL BOOKLET – Includes an essay, “Do You Remember Rock & Roll Radio,” by Paul Corupe, which just as much about FM radio in the 70s as it is about the film itself.
REVERSIBLE COVER ART – Two versions of FM’s original artwork.