THE ISLAND at the End of the World 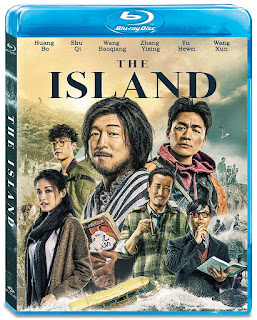 While we don’t play “for investment purposes,” my wife and I occasionally buy lottery tickets. Most often, it’s when the jackpot is too huge to ignore or one of us had a particularly bad day at work (generally the latter). During those stretches in life when nothing’s going right, we'd also joke that, with our luck, we’d probably hit the lottery just as a rogue comet or Titan missile triggers the apocalypse.

Which is essentially what happens to Ma Jin (Huang Bo) and his brother, Xiao Xing (Lay Zhang), in the Chinese survival comedy, The Island.

As a potentially devastating meteor is hurling toward the Earth, Ma Jin and Xiao Xing are on-board a chartered boat with their co-workers heading to a business retreat. It’s established during the ride that Ma Jin is infatuated with Shanshan (Lay Zhang), but neither she nor anyone else appear to regard him very highly. When he discovers he has a winning lottery ticket worth $60 million, his elation is short-lived because the boat is struck by a massive tsunami, stranding the survivors on a remote island.

It’s not revealed if the tsunami was caused by the meteor strike, but since no one is able to contact the mainland, the survivors increasingly believe civilization is dead. Ma Jin still holds out hope, trying to get back home before the time to cash-in his lottery ticket expires. In the meantime, the boat driver and company boss have separated everyone into to rival groups, both scrambling for food, shelter and other necessities for survival. Once Ma Jin’s ticket expires, he miraculously hits a jackpot of a different sort, which allows he and his mechanically-inclined brother to assumed control over all of them.

While The Island sounds like a variation of Lord of the Flies, the tone is considerably lighter, often comedic. Sometimes it’s quite funny, other times sweet-natured, but also has its share of dramatic moments. However, writer-director-star Huang Bo doesn’t isn’t always able to juggle these elements effectively. Not only is the film a too episodic for its own good, it’s also overlong, considering the basic premise. Additionally, some of the dialogue is really bizarre, perhaps due to some questionable translation since the subtitles don’t always make sense (even grammatically).

Still, The Island is watchable and sort-of charming, partially thanks to a likable underdog we can empathize with. Some patience is required during the more meandering scenes – most of them stacked at the beginning – but the story comes to a satisfying conclusion that’s ultimately worth the effort.