THE SWINDLERS: A Familiar Diversion 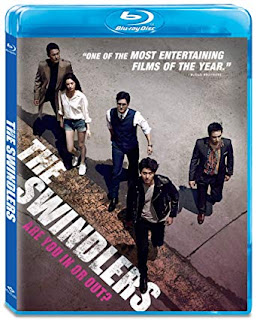 If the Blu-ray cover for The Swindlers evokes a bit of deja vu, perhaps it’s because the photo & lay-out is remarkably similar to that of Now You See Me. Probably no accident, either, since both films involve eclectic teams with elaborate schemes. In this case, it’s a plan to out-con the world’s most notorious con-man.

In the prologue, countless innocent people are duped by Jang (Heo Sung-tae) in a Ponzi scheme to the tune of $4 billion dollars. Lives are ruined and some commit suicide. A retiring forger – nicknamed “London Fog” - is also murdered after preparing fake documents which allow Jang to flee the country. His death is listed as a suicide, but his son, Hwang (Hyun Bin), knows better.

A decade later, Hwang is a clever con-man himself, but makes his living swindling other swindlers (I guess so we have somebody not-so morally ambiguous to root for). Since then, the Korean government’s official position is that Jang is dead, though rumors persist he’s hiding in Thailand. After being apprehended by ambitious prosecutor Park Hee-soo (Yoo Ji-tae), Hwang reveals he knows Jang is still alive. He agrees to work with Park – as well as a group of rival swindlers – to coax Jang out of hiding...on one condition: Hwang gets to kill him.

The remainder of the plot involves the team’s intricate plan to root-out Jang. Though more serious in tone than similar films like Now You See Me or Ocean’s Eleven, The Swindlers plays a similar game...to not-only deceive the bad guys, but also the audience (and not always fairly). Nobody is quite what they seem, nor are most of their actions. In fact, the plot becomes so twist-laden that the film sometimes trips over its own logic. Watching how everything plays-out is fun, but when all is said and done, it doesn’t hold up to much scrutiny.

But I’ll concede one thing. Far-fetched as it is, The Swindlers is enjoyably unpredictable, even if some of its revelations are sucker-punches that might have the viewer crying foul. Still, it’s fun in-the-moment and certainly worth checking-out one time. Any more than that would probably just make the holes bigger.