THE INTRUDER: Dennis Gets His Jack On 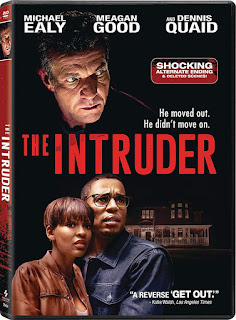 The Intruder is a garden variety thriller that doesn’t bring anything new to the table, but made surprisingly palatable by Dennis Quaid, of all people.

Michael Ealy & Meagan Good are Scott & Annie Howard, two beautifully-bland yuppies who buy a rustic old country home from Charlie Peck (Quaid). Having lived there his entire life, he has difficulty letting it go. After moving in, the Howards keep seeing Charlie on their property, mowing the lawn, chasing teenagers of the property, etc. He also frequently shows up at inopportune times and overstepping his boundaries, which begins to worry Scott once Charlie’s behavior grows increasingly unnerving.

Charlie, of course, is not what he seems, which the audience obviously knows from the get-go and Scott learns pretty quickly. Annie, however, remains stupidly oblivious, seeing nothing wrong with this increasingly amorous old man showing up all the time. Good is decent in the role, but her character is almost laughably dumb.

Or maybe she simply hasn’t seen any recent home invasion movies. Those who have will easily predict every plot turn, jump-scare and ‘shocking’ revelation, probably within the first twenty minutes. In fact, The Intruder would be depressingly mundane if not for Quaid’s wonderfully unhinged performance. He rarely gets to play a villain and it's clear he’s relishing the opportunity. Like Jack Nicholson in The Shining, Quaid almost immediately gives Charlie a subtly sinister quality, his true intentions barely masked by that congenial grin. By the time he goes full-Jack during the finale - even bursting through a splintered door just like Nicholson – Quaid is such delirious fun to watch that a small part of us might actually be rooting for him.

When he isn’t on-screen, however, the interest level tends to wane. Deon Taylor directs with workmanlike skill, but David Loughery’s derivative screenplay offers little we haven’t seen before. Still, The Intruder is ultimately worth checking out just for Dennis Quaid's stupendous scenery-chewing.