CRAWL and the Death of a Douchebag 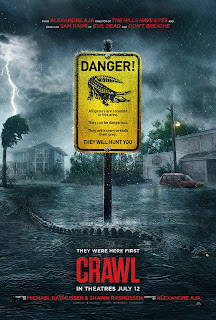 I am guilty of murder. Multiple-murders, actually. In fact, I might even be a serial killer. I knew some of my victims, while others were complete strangers. But all of them had one thing in common: They deserved what they got.

Like many writers with quietly-vindictive dispositions and a poison pen, I’ve occasionally taken perverse pleasure in vicariously killing those who’ve wronged me in real life. Through various writings over the years, I’ve whacked childhood bullies, girlfriends who broke up with me, various in-laws, a few former bosses, bad drivers, noisy neighbors, our current president, my ex-wife and the guy who slept with her.

I’ve just recently killed again, and if you’ll indulge me, I’d like to offer my written confession…

One sunny summer afternoon, me and my youngest daughter, Lucy, decided to escape the heat and take in a movie. The multiplex was busier than I expected, but fortunately for us, most appeared to be there for Disney’s NatGeo musical, The Lion King, while we were planning to check-out the gobblin’ gatorfest, Crawl. Both of us being horror fans, ravenous reptiles had considerably more appeal than computer-created cats belting out 25-year-old showtunes.

Crawl was one of only two movies at this 10-screen theater that wasn’t a sequel, remake, reboot or part of a cinematic universe, meaning no one was lined up to see it. While that’s kind-of a sad testimony on the current state of suburban moviegoing, it also meant there was a decent chance Lucy and I would have the theater to ourselves.

I’d actually been pretty jazzed to see Crawl for awhile, being that it looked like a mash-up of my two favorite genres: disaster and killer animals. As for Lucy, I think I’ve raised her right. While I couldn’t to get her to appreciate the cataclysmic pleasures of The Towering Inferno or Deep Impact, she grew up loving the likes of Jaws, Jurassic Park and Eight Legged Freaks. As fans if either genre will attest, such movies are either good, terrible or good because they're terrible.

Crawl turned out to be a good one, partially because of its more-or-less straight-forward approach, but mainly because it delivers exactly what it promises. Taking place in Florida during a hurricane, Haley Keller (Kaya Scodelario) is a collegiate swimmer who reluctantly returns home to look for her estranged father, Dave (Barry Pepper), because he isn’t answering his phone. The town is already beginning to flood by the time she arrives. When she gets to the house, Haley learns why her dad didn’t return her calls: He’s stuck in the crawlspace below with serious injuries. She also discovers – the hard way – what injured him in the first place. Lurking under the house with them are a couple o’ big-ass alligators.

With the water rising, Haley and Dave need to get out, which is easier said than done. Not only are both of them hurt, their phones don’t work, the town is evacuated and hungry gators are everywhere, as a boatload of looters and some local cops fatally discover. This is all before the hurricane reaches full force. Then there’s Dave’s mangy mutt, Sugar, and goddamn if he isn’t just personable enough to have the viewer going “Oh, no! Not the Dog!” every ten minutes or so.

None of it is very plausible, but it’s deftly directed by Alexandre Aja, who knows how to build suspense and put-together some great, well-timed jump-scares, most of which do not come when expected. He also knows a movie like this needs characters we care about for any of it to work. Most of the secondary cast is simply gator fodder, but Haley and Dave are sympathetic and likable, the complexities of their volatile relationship explored with a surprising amount of depth. Crawl won’t make anyone forget Jaws, but it’s fast-paced and fun, with visual effects that are more-or-less convincing and a few great critter kills.

Not that the idiot seated a few rows ahead of us ever noticed.

Alas, despite the fact Crawl wasn’t exactly packin’ ‘em in, Lucy and I didn’t quite have the theater to ourselves. Near the front was a guy, maybe in his late-twenties, who looked like he just graduated from the Douche Academy: Tapout muscle shirt, tribal tattoo, gym shorts and fucking sandals (never trust a guy wearing sandals anywhere but the beach). He was loudly barking into his cellphone and I’m sure if I tore it from his hand, I’d find 90 selfies of him giving the backwards peace-sign. While his friend sat next to him in silence, this guy – whom we’ll dub Chad because calling him Dick would be too obvious – laughed and dropped f-bombs without regard to anyone else in the vicinity. Lucy and I took seats a few rows back, thinking he’d probably shut-up once the lights went down.

Though he did put his phone away (for now), Chad talked through all the previews, occasionally laughing. I didn’t know what he was saying, but he had one of those booming voices that seemed to reverberate throughout the theater. Nor did he stop when the movie started. While his friend remained relatively quiet, Chad consistently made comments and talked at the screen, stopping only to occasionally pull out his phone for a quick text. Hell, he kept talking even while his friend left to fetch a soda, meaning he was so into himself and his own babbling that it didn’t matter if anyone was actually listening. Hoping to avoid an unpleasant confrontation, Lucy and I moved further back, and even though it made Chad’s douchebaggery at-least tolerable, we could still hear him bubbling under the surface of everything happening on-screen.

Afterwards, Chad was out of his seat and on his phone the second the credits began to roll. However, the act of talking & talking was apparently too cumbersome, so he stopped at the entrance, meaning Lucy and I had to walk around his ignorant ass. That’s it, I thought. Enough is enough.

I stopped, turned to face him and indignantly stated, “You, sir, are one of the worst people I’ve ever shared a theater with.”

Chad shot me a glance. His mouth fell open, a string of drool hanging from his lip. “Wha?” Then he continued his phone conversation.

Further incensed and taking a cue from Bruce Willis in The Last Boy Scout, I gave Chad a swift, powerful palm-strike to the nose. I felt a satisfying crunch, confident I’d just driven bone shards into that feeble brain. Chad’s eyes crossed as he dropped his phone. He wobbled a few seconds, then dropped to the floor like a bag of wet cement. I nonchalantly took his phone and casually informed the individual on the other end that Chad was no longer available. Then I rolled him over, yanked down his gym shorts and shoved the phone up his ass.

Hearing the commotion, patrons began filing out of other theaters, gasping when they spotted Chad’s twitching corpse. The phone lodged between his butt-cheeks began to vibrate.

Soon after, the manager pushed his way through the gathering crowd. “Alright, alright! What’s going on, here?” He looked down at the body, then at Lucy and I. “What happened?”

Chad’s friend aimed an accusing finger my way. “He killed Chad! Killed him in cold blood!”

The manager lifted a brow. “Did you?”

"Indeed, I did,” I replied. “He was talking during the movie.”

He glanced to Chad’s friend inquisitively. “Is that true?”

Regarding me once again, the manager’s harsh face curled into a toothy grin. He placed a hand on my shoulder. “You, good sir, are a hero.” Then he turned to address the crowd. “Ladies and gentleman! We are in the presence of greatness! This guy stood up to a douchebag and gave him exactly what he deserved!”

The crowd suddenly broke out into cheers and applause. They hoisted me above their heads as they chanted “Dave! Dave! Dave!”  Even Chad’s friend gave me a hearty high-five.

"Yay, Daddy!” Lucy shouted, tears of joy rolling down her cheeks. “I’m proud to be your daughter!”

As the crowd carried me to the lobby on their shoulders, the manager boldly proclaimed, “Free movie tickets for life, Dave! For you and your whole family!”

Suddenly, Salma Hayek emerged from the crowd, shot me a seductive smile and offered the key to her hotel room. Though flattered, I politely informed her I was happily married. “But I’ll see you in the movies!” I added.

Just then, a CNN news van screeched to a halt in from of the theater. Anderson Cooper and a cameraman burst into the lobby. After the crowd finally put me down, I strolled over for my interview.

Anderson thrust a microphone in my face. “Dave, you just liberated the world from a notorious cinema terrorist. To what do you credit your awesomeness?”

"Well, Andy,” I replied. “I can call you Andy, right? I owe it all to God, clean living and learning how to kill a man with my bare hands from watching action movies. I also wanna thank my lovely wife for finding that twenty dollar bill in my pants while doing the laundry. Without it, this afternoon at the movies with my kid wouldn’t have been possible.”

"Speaking of kids, do you have words of advice for little ones who might be watching?”

With that, I grabbed the microphone and stared into the camera with the most menacing mug I could muster. “When you’re at the movies, kids, shut the fuck up. I just might be watching.” Then I dropped the mic, took Lucy by the hand and strolled out of the theater. As the crowd followed, Anderson and Salma led them in a chorus of “For He’s a Jolly Good Fellow.”

And there you have it. My confession. While it feels liberating to get it off my chest, I can’t help but wonder when (not if) I’ll be compelled to kill again. After all, there are legions of Chads out there and I seem to run into most of them at the movies. Here's hoping the next Chad won’t be you.
Posted by D.M. Anderson at 11:08 PM