JOHN WICK: CHAPTER 3 – PARABELLUM on Digital 8/23 and on 4K, Blu-ray, DVD, and On Demand 9/10
Super assassin John Wick (Keanu Reeves) has a $14 million price tag on his head after killing a member of the High Table, the shadowy international assassins’ guild. Now excommunicado, and with an army of the world’s most ruthless hit men and women on his trail, John must find a way to survive in this third chapter of the adrenaline-fueled action series. Take home John Wick: Chapter 3 – Parabellum and immerse yourself in the thrilling world with exclusive special features, including all-new featurettes that explore the mythology and over-the-top action of the John Wick expanded universe. Dive into the hidden world of Killer Ballerinas, Shinobi, and the Bowery King, learn the intense planning that went into the film’s incredible horse chase sequence and “dog-fu” fight sequences, and even get an editing master class with director Chad Stahelski and editor Evan Schiff!
MEN IN BLACK: INTERNATIONAL on Digital 8/20 & 4K Ultra HD, Blu-ray & DVD 9/3
The Men in Black have always protected the Earth from the scum of the universe. In this new adventure, they tackle their biggest, most global threat to date: a mole in the Men in Black organization. The 4K Ultra HD Combo Pack and Blu-ray of MEN IN BLACK: INTERNATIONAL feature exclusive deleted scenes--plus erase away those embarrassing moments with an all-new Neuralyzer infomercial and let Frank the Pug trace your out-of-this-world roots with Alien-centry.com. All formats come packed with bonus feature content, including a gag reel, several behind-the-scenes featurettes and much more! 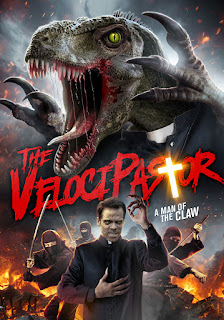 THE VELOCIPASTOR - out this August!
The Brendan Steere directed classic-in-the-making will be available on DVD and Digital August 13 on such platforms as iTunes, Comcast, Spectrum, Dish, Vudu, Amazon, Fandango and Sling. A Blu-ray release will follow September 17.

After a devastating family tragedy, a priest travels to China to find deeper spirituality, but instead is endowed with an ancient ability that allows him to turn into a dinosaur. At first, he is horrified by his newfound superpower, but a local prostitute convinces him to use his newfound gift to fight evil – and ninjas. Gregory James Cohan, Alyssa Kempinski, Daniel Steere, Yang Jiechang, Jesse Turits, Fernando Pacheco de Castro star with Aurelio Voltaire in the Wild Eye Releasing title. 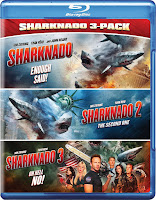 SHARKNADO 3-PACK
Like that five-year-old nephew who thinks the exact same fart joke is just as funny tenth time as it is the first, there are more Sharknado movies than the surgeon general recommends. Still, the first two were funny and the third had Brad Keslowski, and we found this triple feature at DOLLAR TREE. Broken down, that’s only 33 cents per flick. Whether you were in on the joke or thought it was stupid from the get-go, that's a lot of gratuitous cameos, CGI blood and blatant product placement for your buck.
Posted by D.M. Anderson at 9:23 AM