THE GUMBALL RALLY vs. Duran Duran 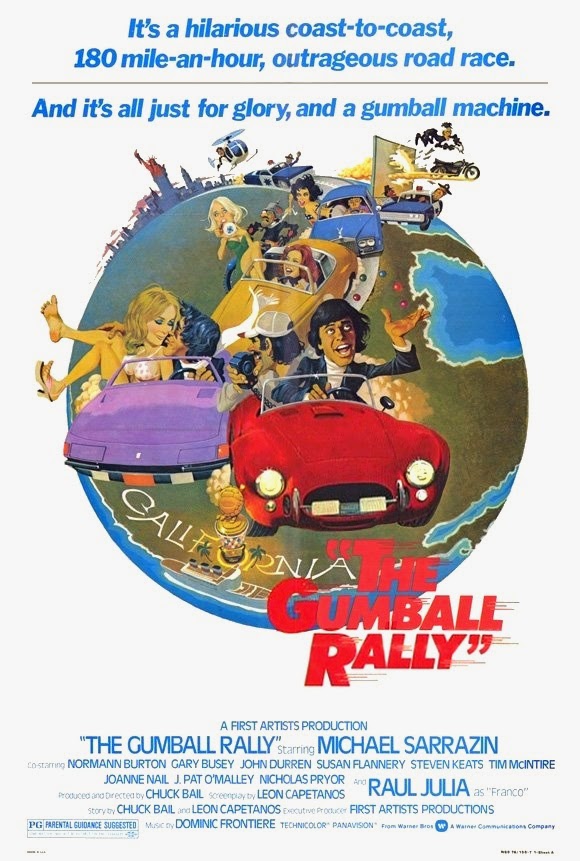 Since discovering eardrum-shattering thunder of Deep Purple, Alice Cooper and Kiss as a kid, I’ve been a loyal and die hard heavy metal fan. Mom and Dad hated it, of course (“That’s not music! It’s just noise and screaming!”), but not only did it truly speak to me, there was something innately appealing about the fact that, with few exceptions, metal music flourished outside the mainstream like weeds punching through the cracks in your driveway.

Metal fans were, and still are, a fickle bunch, reveling in our favorite artists’ relative obscurity and making us unique among the mindless masses blindly-swallowing the latest digestible pop hit (sort-of like today’s hipsters, only without sandals). In 1978, when you bumped into someone who shared your love of Van Halen’s debut album (before the were superstars), you were instant kindred spirits.

We were an exclusive & elitist club with strict rules. With a few notable exceptions (Pat Benatar, Billy Squire, Red Ryder, The Cars, Billy Idol and others whose early songs had respect-worthy guitar riffs), we were unofficially required to declare utter contempt of anything resembling disco, new wave, country, R&B or pop (especially once MTV became a cultural phenomenon).

One of those contemptible banes on modern music was Duran Duran, five English pretty boys with big hair, great looks and flashy videos, part of the so-called ‘New Romantic’ genre of English pop. In the metal camp, they represented the worst aspects of popular music…homogenized, image-driven singles calculated to make teenage girls swoon (much like One Direction today). Duran Duran were the de-facto poster boys of everything headbangers hated.

But unlike modern boy-bands cynically assembled to dance and croon generic pop tunes written by their managers, Duran Duran wrote all their own songs and played every instrument. They were good musicians who simply had the misfortune of being drop-dead gorgeous.

For me, regularly-worshiping at the alter of Iron Maiden and Judas Priest, I became distressed upon the realization that Duran Duran actually had some great fucking songs. Were they works or art? Maybe not, but a lot of them were mindlessly catchy and sounded great blasting from my car stereo. But I could never admit that out-loud. I’d already chosen sides, oft-declaring my disgust for this type of processed pop. Still, I privately found myself cranking up “The Reflex” whenever it popped up on the radio, feeling like a hypocrite.

As I grew older and more mature, I lightened up on the whole us-against-the-world metal mentality. It was okay to admit I probably always liked U2, Blondie, Cyndi Lauper and Prince. But Duran Duran? Their lingering stigma as a ‘boy band’ later had me asking my wife (who always loved them) to buy their newest album for me because I was embarrassed to admit “Ordinary World” was one of the greatest songs I ever heard.

Like Duran Duran’s synth-pop heyday, The Gumball Rally (1976) is a dumb car chase comedy made during a decade rife with them. I seriously doubt a month went by when there wasn’t a film in theaters featuring mindless auto-destruction, broad humor, hot chicks and super-cool antiheroes out-driving legions of cops so dumb they make The Simpsons’ Chief Wiggum look like Frank Serpico. This disreputable genre’s popularity peaked with 1977’s Smokey and the Bandit, one of the few chase films released by a major studio with a cast of A-list actors.

These movies were brainless crash-fests designed to appeal to yahoos who got-off on destruction, boobs and slapstick. The Gumball Rally, depicting an illegal coast-to-coast road race, was simply one of them, much like A Flock of Seagulls was one of countless synth-pop bands to rock the 80s. Being 13 and relatively undemanding, I found The Gumball Rally a lot of fun, laughing aloud at the cartoony characters, broad humor and amusing - though totally preposterous - chase scenes. Michael Sarrazin, who previously achieved some notoriety as a decent character actor, oozed onscreen cool, even though he was aping Peter Fonda. The Gumball Rally also features a few actors who’d go on to find much-greater fame later on (Gary Busey, Raul Julia).

As I grew supposedly more sophisticated, I left childhood pleasures behind, including movies which have not aged too well (like Grizzly, Heavy Metal and Meatballs). Shortly after Smokey and the Bandit cleaned-up at the box office and films like Raiders of the Lost Ark and The Road Warrior redefined the action genre, these old car chase flicks seemed stupid and archaic.

While I now scoff at some films I found awesome as a kid, there’s still a soft spot in my heart for The Gumball Rally, even though I generally hate films loaded with slapstick humor, exaggerated characters and gratuitous scenes where the camera lingers on breasts longer than it should. I’ve since-fancied myself as a knowledgeable & pretentious movie snob, but must confess I still occasionally pop this film into by DVD player and find amusement in the same type of humor I normally declare offensively-stupid, once-again rendering me a hypocrite. For reasons I can’t explain, The Gumball Rally simply rubs me the right way, much like the music of Duran Duran.

It must have rubbed a lot of other people the right way, too. Though the film was inspired by a real-life cross-country rally organized by auto-enthusiast Brock Yates, similar races have since incorporated the “gumball” moniker. Even Disneyland holds a similar MiceChat Gumball Rally, where participants compete to determine who can ride the most rides in a single day, and the winner receives a trophy strikingly similar to the one shown in The Gumball Rally.

On an ironic sidenote, The Gumball Rally was financed by First Artists, a production company formed by Paul Newman, Barbra Streisand, Sidney Poitier, Dustin Hoffman & Steve McQueen with the purpose of giving artists more creative control. This company didn’t exist long (1969-1980), but The Gumball Rally (featuring none of these stars) was one of their most profitable films.
Posted by D.M. Anderson at 6:10 PM