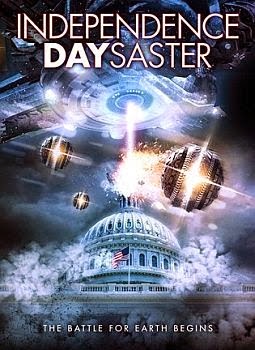 Based on the titles alone, most SyFy Originals can be broken down into three categories: 1) tacky tongue-in-cheek monster-fests, 2) outrageously-plotted apocalyptic disasters, and 3) barely-disguised rip-offs of theatrical blockbusters. What they all have in common, however, are cheap CGI and casts TV actors looking for extra work, along with the token familiar face whose best days are behind them.

Independence Daysaster obviously falls under the theatrical rip-off category, and if the title alone doesn’t tell you which film it’s ripping-off…well, as someone from said-film once famously quipped, “Welcome to Earth.” But it also borrows a fairly liberally from War of the Worlds, in that this alien invasion comes from above and below, attacking us with lightning-spewing yo-yos from the sky, phallic iron drills from the ground. Caught in between is our primary cast, a small town fireman, his older brother (who happens to be the President) and, of course, a few nerdy teens whose computer skills are utilized to try and save the day. They spend a great deal of time driving around in the middle of nowhere (thus shaving the budget by millions), dodging or reacting in horror whenever the space yo-yos show up.

Those expecting anything like the pyrotechnic mayhem of Independence Day will, of course, be massively disappointed. You won’t see any aliens, either. But what were you expecting? Anyone who’s ever sat through even a few SyFy Originals know they are intended as nothing more than an amusing way to kill a few hours at home on a Saturday night.

As such, Independence Daysaster is no better or worse than Ice Twisters, 12 Disasters of Christmas, Earth’s Final Fury or any other straight-to-video epic used to pad-out SyFy’s TV schedule and ultimately show-up in a Wal-Mart DVD bin for five bucks. Still, movies like this can be cheeky fun if you’re in the right frame of mind, and Independence Daysaster is no exception.