Book Review: STEVEN SPIELBERG AND DUEL - THE MAKING OF A FILM CAREER 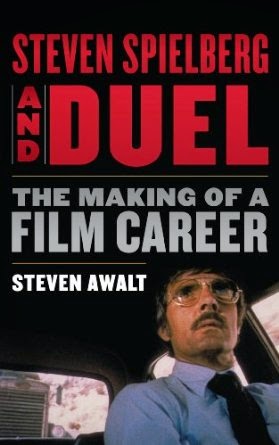 Jaws, Close Encounters of the Third Kind and E.T. may have made Steven Spielberg a household name among even the most-casual movie fan, but none of it would have happened if not for Duel, a modest little made-for-TV thriller produced & aired in 1971 (part of ABC’s Movie of the Week series), and Spielberg‘s first noteworthy attempt at feature-length storytelling.

This book by Steven Awalt is a marvelously detailed and entertaining document of Spielberg’s humble beginnings as a director-for-hire for Universal Television, ultimately culminating in Duel. That film belied its budget-conscious TV origins in every way imaginable, with a truly cinematic look and tone that even impressed the likes of Frederico Fellini.

But this isn’t just Spielberg’s story. Although he’s the focal point, we also learn what inspired Richard Matheson to write the original short story, and how it eventually ended up being produced as an ABC Movie of the Week. The book is loaded with interviews and quotes from most of the primaries involved in its production, including Spielberg, Matheson (who adapted his own story for the film), Universal president Sid Sheinberg, composer Billy Goldenberg, star Dennis Weaver and, most-amusingly, stunt driver Carey Loftin, who wasn’t as impressed with Spielberg as others in the production.

As presented here, it's obvious from the get-go Spielberg was a unique talent destined for greater things (though highly resented by some of Hollywood’s old-guard still lurking the Universal lot at the time). In the end, we learn to appreciate just how important this little film was to the careers of Spielberg and everyone involved else in this film.

But that’s not quite the end. Also included in this book is Duel’s entire original teleplay by Matheson. The script is actually rather dry and dull on paper, which actually serves as further testament of Spielberg's skill as a visual storyteller.

Even today, Duel is widely considered one of the greatest stand-alone made-for-TV films ever made, which broke traditional rules because a young, ambitious director wanted to make it something more than the usual Saturday night schedule filler. With this book, we totally appreciate Steven Spielberg’s inert genius and understand how he was able to parlay Duel’s success into what’s arguably the greatest directorial career of all time. This book is a must-read for any film fan.