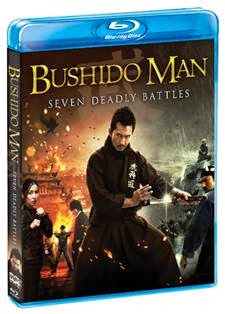 Toramaru (Mitsuki Koga) is a modern day Japanese warrior who’s spent over a year challenging seven different fighters, all with specific individual skills, in order to become a master of The Cosmic Way. This is a discipline which, not only requires Toramaru to defeat each fighter at their own game, but “know the enemy by eating his food.” The young apprentice then returns to his mentor, Master Gensai (Yoshiyuki Yamaguchi), to tell of his adventures and give him the scrolls he earned by defeating them in battle.

These encounters are presented in flashback as Gensai anxiously hangs on Toramaru’s every word, enthusiastically voicing his approval when hearing the variety of dishes he devoured prior to fighting. Meanwhile, Toramaru engages in kung-fu, swordfights, knife-fights, stick-fights, even gunfights (including ’Arm Bullets,’ which fire rounds from a wristband when throwing a punch).

Sounds like a typical, somewhat ridiculous, martial arts flick, the kind of overly-serious epic that's often unintentionally chuckle-worthy. Bushido Man starts off that way, too, especially with its obviously limited budget and exaggerated performances (no one’s gonna confuse this with House of Flying Daggers). My oldest daughter (enamored with Asian culture) and I were prepared to go all Mystery Science Theater on its ass. But less than ten minutes passed before, to our delight, we realized Bushido Man is ridiculous on purpose, a whacked-out and remarkably funny film, brilliantly presented with a completely straight face and never descending into broad parody.

There are two other elements which make Bushido Man remarkable. First, the action scenes are as expertly choreographed and thrilling as any serious martial arts film. Second, this is probably the best ‘foodgasm’ movie I’ve seen since Julie and Julia. The scenes where Toramaru samples the dishes of his enemies made me hungry. But, alas, we were watching this film late at night, which made finding such delectable dishes impossible.

Best of all, Bushido Man is unpredictable at every turn. Sure, because of the way it’s set-up, we know how every flashback segment turns out, but each encounter is full of amusing surprises. This also applies to the climax. I wouldn’t dream of giving it away, but trust me, do not shut-off this film when the end credits start rolling. You’ll miss the best gag of all.

EXTRAS: The Making of Bushido Man