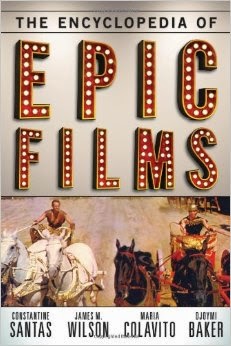 There’s nothing a die hard movie fan loves more than digging into a big fat reference book about their favorite subject, especially when it’s well-written by knowledgeable authors. And although the Cinema Surgeon General warns us regularly of the dangers of overindulging on certain fattening flicks, what movie fan doesn’t love occasionally gorging themselves on a big, fat, spectacular epic? After all, they're Hollywood’s equivalent of a pizza loaded with everything.

Most of us hold a few certain epics near and dear to our hearts. Like clockwork, I watch The Ten Commandments every Easter, and the entire Godfather trilogy annually rings-in my summer break (since I’m a teacher in the real world). Whenever I’m laid-out with the flu, The Good, the Bad and the Ugly and The Great Escape are as comforting as Ny-Quil. All those films, and just about every other movie one would define as epic (and some one wouldn‘t), are included in The Encyclopedia of Epic Films. If nothing else, this 700 page volume is comprehensive. No one’s likely to say to themselves, “How could they leave out (insert title here)?”

The book does a decent job defining what constitutes an epic film, not just its length, but its scope, budget, imagery and timeless story elements. Everything is well-written and there’s no disputing these authors’ knowledge. Additionally, each entry includes extensive cast & crew credits, Oscar/Golden Globe wins and nominations, its availability on DVD/Blu-Ray and bibliographical resources for those inclined to read further.

However, The Encyclopedia of Epic Films is wildly inconsistent in how the entries are written. Some offer interesting analysis on a film’s historical influence or impact, while others are nothing more than detailed plot summaries, with no insight about its production or importance. Still-others, while effectively summarizing a film’s story, end up being a particular author’s subjective critique of its quality. Simply put, there’s no unified structure to these entries, almost as though the four credited authors had no agreed-upon outline with which to write them. That means we get a truly thoughtful analysis of King Kong (1933), while a film just as groundbreaking, Goodfellas, is given nothing more than a detailed synopsis of a plot, with no added insight or commentary. Not only that, the book’s definition of an ‘epic film’ could be called into question with the inclusion of Alien (a claustrophobic classic, but hardly an epic) and Battlestar Galactica (a cheesy, made-for-TV pilot gets its own entry in a book of epic films?).

Then there’s an issue with the appendices. There are three, one for superhero & franchise films, one for foreign films and one for epics made for TV. The latter two are mostly okay, mainly because I admit I’m not all that knowledgeable of them. But the superhero and franchise section seems randomly thrown together. This is where Star Wars, Indiana Jones, Harry Potter, Lord of the Rings and Toy Story reside. Okay, franchises are a different animal than a single classic spectacle, but does anyone really consider Toy Story epic? Not only that, why is Armageddon included in this section? Unless I watched a different version than everyone else on Earth, it doesn’t qualify as a superhero film or a franchise.

Still, this hefty volume is worth reading (and revisiting from time to time…the best quality of a bathroom book). It does occasionally provide some interesting background about iconic films, but as you read further, you’ll actually be able to differentiate one author from other pretty quickly (noting the initials after each entry). For example, James W. Wilson is content to simply summarize a film (in nearly anal-retentive detail), while Constantine Santas provides actual analysis, providing more discussion-worthy insight.