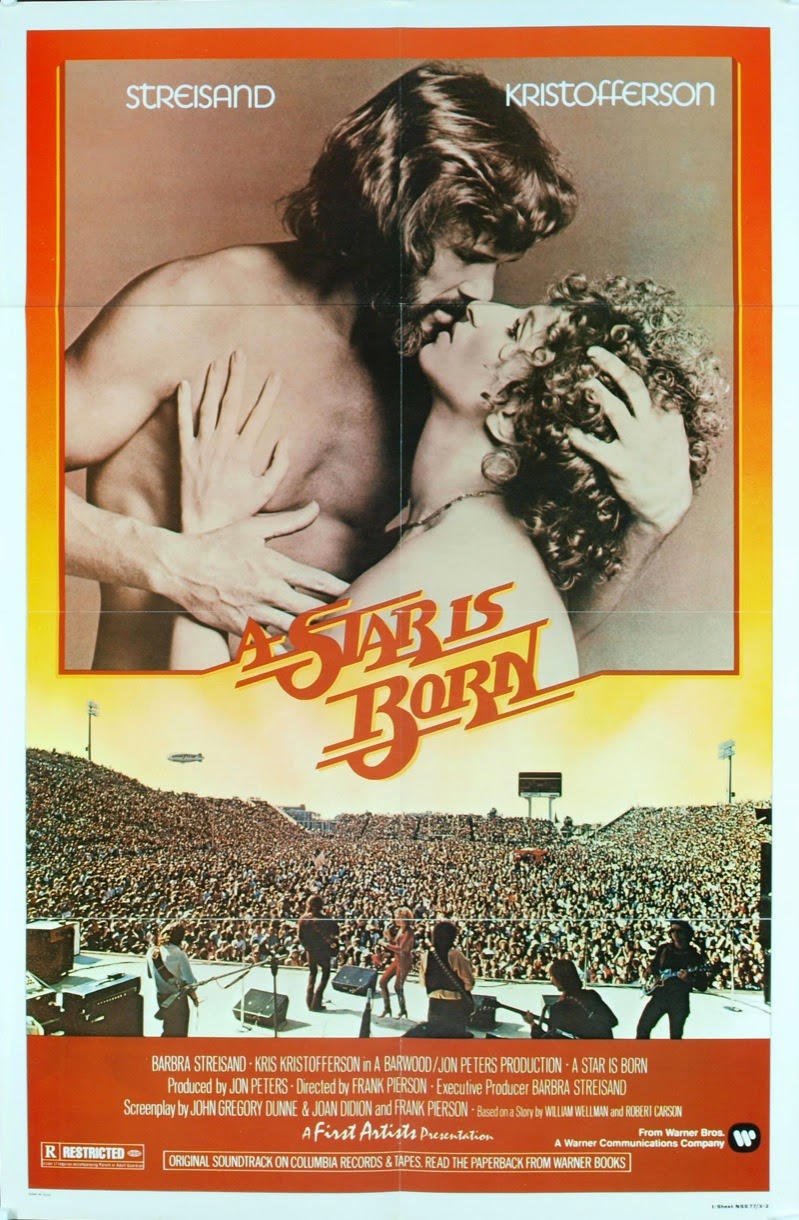 I had my first real girlfriend in middle school. Her name was Tammi. Sure, I had ‘girlfriends’ in grade school, but those relationships consisted of passing flirty notes during class. Tammi was one of the first girls I ever kissed, more-or-less cementing a fairly intense on-again-off-again relationship. Almost daily, she wrote long love letters during our on-again times, which I found a bit bewildering. Where'd she find the time?

Our school newspaper had a stupid regular feature which allowed kids to dedicate popular songs to their friends or boyfriends (most guys didn’t bother because shit like that doesn’t occur to them). Tammi dedicated “Evergreen” to us, a song from the Barbra Streisand/Kris Kristofferson remake of A Star is Born. Both the soundtrack and film were huge at the time. For Tammi, “Evergreen” was Our Song (as it was for a lot of young idiots in love), which I didn’t dispute, even though I’ve personally never associated any of my feelings with a particular song. I liked Tammi a lot, but as a card-carrying movie nerd, the first thing I thought when reading her heartfelt dedication on page three was, couldn’t you have picked something from a good movie? On the other hand, it wasn’t as though Jaws was loaded with torch songs.

A Star is Born tells a familiar Hollywood tale, the loving-yet-tumultuous relationship between a burnt-out celebrity whose star is waning from his self-destructive behavior, and a struggling-but-talented woman whose fame eclipses his. Unlike the original 1937 film and the classic 1954 remake starring Judy Garland and James Mason, this version transposes the story from old Hollywood to the modern music business, with Streisand as a hopeful young singer (though well into her thirties), Kristofferson a grizzled rock star.

But this version of A Star is Born is mostly a showcase for Streisand in full diva mode (even giving her hairdresser boyfriend, Jon Peters, producing credit) with Kristofferson’s character more of an afterthought. That’s a shame when you consider they initially wanted Elvis Presley as her co-star. No way was he a better actor than Kristofferson, but this would have definitely been an ironic case of art imitating life, making the film far more intriguing (not to mention historically bittersweet, since Elvis died only a year later). And who knows…after wasting the 60s starring in every piece of Hollywood junk his money-grubbing manager (Colonel Tom Parker) signed him up for, maybe a melancholy performance in A Star is Born could have vindicated him as an actor the same way his ‘69 Comeback Special briefly boosted his music career.

But I knew none of this back in 1977 when A Star is Born showed up at Cinema V, our local second-run theater. All I knew was the songs were horrible (including “Evergreen”), the movie was reeeally long and Barbra Streisand was the ugliest old woman Hollywood ever tried to force on us as a sex symbol. I did, however, buy the movie poster for my bedroom, mainly because of the hilarious photo suggesting a serious attempt by Kristofferson to make it to second base.

Still, I appreciated Tammi’s dedication because I knew it was heartfelt, even if I wasn’t feeling the song myself. Sure, I loved her - as much as an immature middle schooler is capable of - but to this day, I never truly understood the whole Our Song thing.

Eventually, Tammi and I were off-again for good, and it didn’t end well.

Looking back at all my past relationships, the ones which ended the messiest were those which initially exploded in intensity and always included an Our Song. I married my high school sweetheart, who once cited “Endless Love,” the godawful theme to an equally shitty movie, as a testament to our intense devotion. Four years later, messily-divorced and more cynical (go figure), a more accurate Our Song would have been “Love Stinks.”

Later, I briefly dated an attractive woman named Bonnie, several years older with a couple of kids. Things were great at first, but I became slightly apprehensive when, on the second date, she declared Cutting Crew‘s “I Just Died in Your Arms Tonight” as Our Song. It’s one thing for dumb kids to have an Our Song, but a 30-year-old Mom? Things ended badly when, on our fourth date, she asked how I’d feel about being a stepfather to her children. I’ve been called shallow, I’ve been called an asshole, I’ve been called emotionally-bankrupt, but I wasn’t ready for anyone to call me dad. Needless to say, Bonnie and I ceased dying in each other’s arms shortly after.

For me, Our Songs became Bad Omens.

I eventually got married a second time and we’ve been together for over 25 years. My wife and I have two wonderful kids, a nice little house and decent jobs. However, one thing we’ve never had (besides matching Harleys, which I still hope for someday) was Our Song, perhaps because both of us had already outgrown such trivialities by the time we met. Sure, we picked out a couple of songs for our wedding, but more for how they sounded than the actual lyrics. That’s because a four minute love ballad is about as superficial as a Hallmark card in defining a relationship, and most people eventually learn that. From my personal experience, anyway, if you need an Our Song as a symbol of your feelings, you two are doomed.
Posted by D.M. Anderson at 3:39 PM