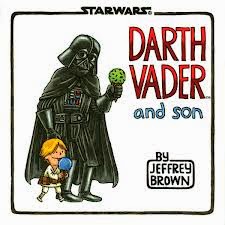 It says a lot about an author who can create a couple of wonderfully funny, satirical and ultimately sweet illustrated books based on some plot twists from a sci-fi movie franchise. Of course, it helps if that franchise is Star Wars, and those plot twists are so well-known that even the six people on Earth who’ve never seen them know what they are. It also helps that the author & illustrator, Jeffrey Brown, is both a loving dad and apparent Star Wars fanatic. 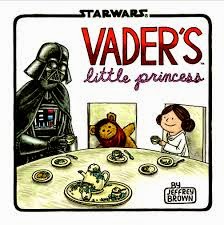 Brown’s two books, Darth Vader and Son and Vader’s Little Princess, hilariously show Vader as a doting father of his two kids (Luke & Leia) and the everyday trials of parenthood, while still remembering everyone’s place in Star Wars history. Both books tread a fine line between the type of universal parent humor you’d find in Reader’s Digest and the subtle satirical gags only the geekiest of Star Wars fans could appreciate. Brown’s colorful illustrations are priceless, especially those of Vader, who’s expressionless in every panel, yet we still feel his parental angst when dealing with his cankerous kids.

Of the two, I personally prefer Vader’s Little Princess, but that could be because I have daughters and can relate to most of the cartoons. That’s what so great about both books. I’m certain my brother in law would find Vader and Son funnier because of his boisterous boys. Unlike a lot of officially-licensed Star Wars products (yes, these books have George Lucas’ blessing), extensive knowledge of this universe is not required. Simply being a selfless parent will suffice.