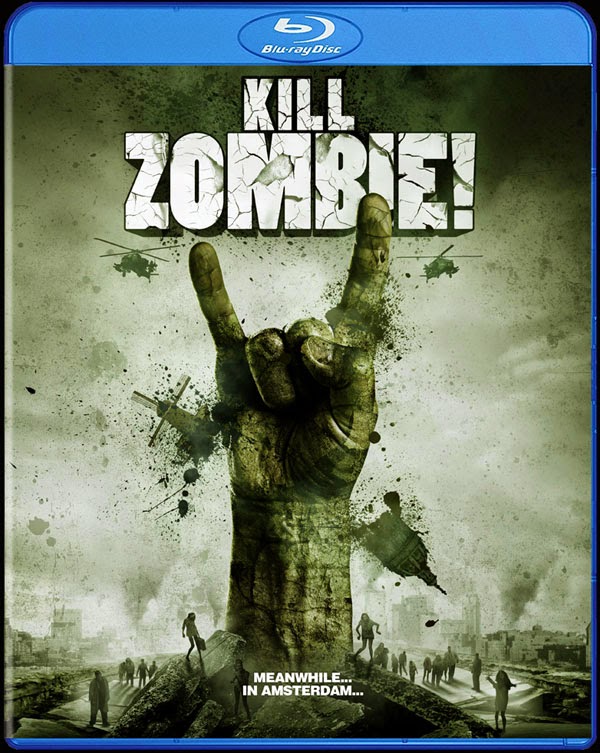 Shaun of the Dead wasn’t the first zombie-comedy (or, zomcom). That distinction probably goes to 1985’s Return of the Living Dead (though a decent argument could be made that Romero’s Dawn of the Dead is primarily a comedy). But Shaun more-or-less defined the genre as we know it, setting the standard by which all others would be compared. Since then, only Zombieland really achieved the same level of greatness, though a few others have had their moments (Fido, Dead & Breakfast and Warm Bodies immediately come to mind). But for the most part, the zomcom genre has been run into the ground by a slew of cheap, overacted splatstick flicks (mostly released directly to video). Few of them actually offer anything new, kind of like someone who thinks coming back with “That’s what SHE said!” is still funny.

The awkwardly-titled Kill Zombie! (aka, Zombibi) is no exception. Hailing from The Netherlands, this film has the usual eclectic batch of ‘eccentric’ characters reluctantly making their way through Amsterdam trying to help lowly office worker, Aziz, rescue a co-worker he’s smitten with, who’s trapped in their office tower after a Russian space station crashes into it. The station, however, brought something back…a slimy moss which turns people into ravenous, green-blooded zombies.

No, it isn't explained how almost everyone in Amsterdam is infected, yet most folks in the stricken building are not. Nor is it explained how some zombies can be killed with a single blow to the head, while others keep coming after being repeatedly bludgeoned, shot and stomped-on. Nor is it explained why, even though surrounded by hordes of the undead, the main characters often stop in the middle of the street to bicker with each other. But that's just nitpicking. I guess two more-important questions need to be asked: Is Kill Zombie! funny? And if it isn't funny, is it at-least gory?

Most of the attempts at humor are lame…‘wacky’ weapons (bowling balls, footstools, a tennis ball launcher), heavy-handed satire (tired pop culture references, an idiotic newscaster & out-of-blue title cards), slapstick violence and an energetic cast forced to waste all their energy shouting their lines or looking comically-dumbfounded every five minutes. This is all accompanied by a bouncy music score to remind us how hilarious everything is.

As for the violence...much of it is elaborate and over-the-top (as in most zomcoms), but since these zombies bleed and explode green slime as opposed to real blood, any shock value is greatly diminished. Seeing our heroes drenched in green goop after slaughtering a roomful of the undead isn't too far removed from a celebrity getting slimed on a Nickelodeon awards show.

Since it’s all been done before - and in better movies - Kill Zombie! is depressingly tedious, even though it never slows down for a minute. Desperate-for-a-fix zombie fans might find consolation in a few creative kills and an admittedly-hot Gigi Ravelli as a no-bullshit, ass-kicking cop (she also turns in the best performance in the movie). Others are better off popping in their old copy of Shaun of the Dead.