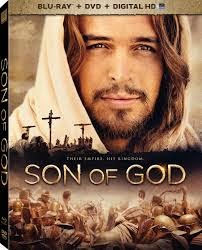 This is about the life and death of Jesus Christ (sorry, I didn’t mean to give away the ending).*

Son of God is adapted from a chapter of the popular History Channel series, The Bible, and expanded for theatrical release. It did solid business among the Christian crowd by preaching to the converted, much like AC/DC does whenever they sing about the glories of rock & roll. In other words, if you aren’t already a disciple, this ain’t gonna change your mind.

Hence, Son of God is difficult to review objectively. It’s essentially a collection of Jesus’ greatest hits (walking on water, healing the injured, resurrecting the dead, etc.), his life competently-but-unimaginatively rendered. The film is a literal interpretation of events depicted in the New Testament, a chronological checklist of everything most of us already know about Jesus. Since he goes from zero-to-messiah in the first fifteen minutes, actor Diogo Morgado is given the thankless task of portraying Christ exactly as the Christian audience wants him to be…angelic, peaceful and loving, free of any human frailties. That has to be a shitty gig for a budding actor (on the plus side, he has great hair, and would look awesome onstage fronting an 90s-era grunge band).

Son of God is mostly devoid of character development, suspense and surprises. The cast does its best (none of the performances are bad), but like Morgado, they are straddled with roles which are mere caricatures; displaying any depth or unique interpretation might offend its intended audience. The script simply requires them to do little-more than shout or solemnly paraphrase grandiose statements from The Bible. The CGI effects (mostly depicting the city of Jerusalem) are on par with what you’d see in a SyFy disaster movie (despite the epic story this film tells, everything feels rather small).

However, those very criticisms are what likely make Son of God a great film for its intended audience, who are simply looking to enjoy an oft-told story which confirms their faith. They don’t want a reinterpretation of Jesus’ life, just like headbangers don't go to an AC/DC concert hoping to hear an acoustic ballad. As such, I suppose the film accomplishes its task magnificently.

On a side note, there will be inevitable comparisons between Son of God and The Passion of the Christ (the one ‘Christian’ film to do insane box office business). The final act of Son of God is indeed reminiscent of Passion, depicting Jesus’ cross-baring and crucifixion. While not quite as graphic, it is still justifiably difficult to watch.

EXTRAS:
*Yeah, that was a joke. Thank's folks. I'll be here all week.