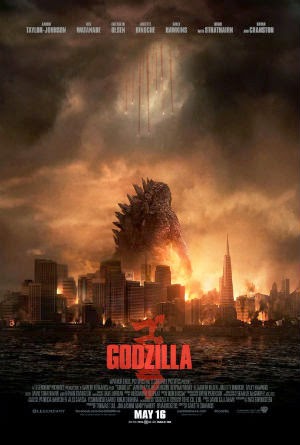 I wanted to see the new Godzilla, but my wife, Francie, hated the 1998 remake enough to sour her on the big ol’ lizard forever.

But I grew up on this stuff. One of Portland’s local TV stations used to show old Godzilla flicks on weekday summer afternoons, along with a few other classic behemoths from the 50s and 60s. Personally, I preferred the nasty, city-killing Godzilla to the superhero he became when fighting other monsters, but all those movies cemented my affection for rampaging beasts who seemingly exist only to knock buildings down. After awhile, I also wondered why the hell everyone insisted on staying in Tokyo, a town literally leveled every year by fire-spitting, radioactive reptiles (I guess the same reason everyone moves right-the-fuck back to Florida after yet-another hurricane blows through).

Monster movies are dumb but a hell of a lot of fun, and I still love them, especially those featuring creatures hell-bent on urban destruction. Even though Jurassic Park was a groundbreaking classic and the best of the series, if you were to strap me to a lie detector, I’d be forced to confess I enjoyed The Lost World more, mainly because an angry T-Rex wreaks-havoc on the streets of San Diego. I’m also one of the few folks left on Earth willing to admit I actually enjoyed the 1998's Godzilla, despite plot holes, lapses in logic and the monster’s inconsistent size from one scene to another. Sure, it’s Godzilla in-name-only and phenomenally stupid, but considering it had been decades since anyone attempted a big-budget giant monster movie, I had a good time.

But my wife nixed taking the family to see this new one, partially because she hated the first remake, but also because the trailer made it look like another dark, gritty reboot (fast-becoming a cliche).

“You’re the only one who wants to see it,” she informed me, which made sense since family nights at the movies are no longer something we can do on a whim. It’s too damned expensive. Francie and I have occasional ‘date night’ movies, but for the most part, unless it’s something three-out-of-four of us want to see, we’ve generally stopped going to the movies as an entire family. However, we are still flexible during those rare occasions when that ‘gotta see’ factor is a tie. But one-out-of-four? That means you're waiting 'till it comes out on video.

So imagine my excitement when, during dinner one night, another Godzilla trailer popped up on TV and my youngest daughter, Lucy, piped in with “I wanna see that!”

Yessss! Two people - half the family - want to see a reptile's rampage! Suck on that, Francie!

Prior to this, Lucy had been my little horror buddy, and the two of us would stay up late at night watching scary movies together. We always had a great time, but a few of those movies gave her nightmares so Francie curtailed such activities (though I wish she’d have informed me before I brought home Insidious Chapter 2 for the sole purpose of enjoying it with Lucy, since the original is her favorite scarefest).

Though weekends are often designated as family time, Francie suggested I take Lucy to see Godzilla while she and Natalie went shoe shopping.

Hmmm…a day spent hanging out at every women’s shoe store on Portland‘s east side versus a few hours of massive monster mayhem with my little horror buddy...decisions, decisions.

I love my family, but would rather sit through an Adam Sandler film festival while getting my teeth drilled without anesthesia by a drunken epileptic than spend the day driving them to shoe stores, so Francie dropped the two of us off at the Division Street Cinema for the first Saturday afternoon show.

While we were waiting in line for tickets, it occurred to me that Lucy and I had never really gone out together, just the two of us. Sure, we sometimes hang-out at home watching movies or play the occasional game together, but it’s never been me & her on a grand day out. She’s 10 years old and it’ll only be a few short years before hanging out in public with dad would be as appealing as…well, sitting through an Adam Sandler film festival while getting her teeth drilled without anesthesia by a drunken epileptic. But for now, we were movie buddies again, and even though two matinee tickets, a tub of popcorn and two sodas cost me 36 fucking dollars, I was gonna make the most of these few hours together, regardless of how Godzilla turned out.

And Godzilla turned out to be awesome, and not just because of my love for the genre.

As Francie suspected, Godzilla does begin somberly, and even gets a bit depressing during the set-up. It also takes its time; an hour passes before our scaly star first appears in all his 300-foot glory, and he’s not even the first mega-monster to show up. Before that, the giant chrysalis of a MUTO (Massive Unidentified Terrestrial Organism) is discovered beneath a nuclear power plant in Japan. A MUTO is a prehistoric parasite that consumes radiation and looks like a giant version of the ‘bugs’ from Starship Troopers. The idiotic powers-that-be have been keeping its existence a secret for years in order to study it. Of course, it gets loose, otherwise there’d be no movie, because the MUTO’s appearance is what lures Godzilla out of the ocean depths (yeah, the government knew about him, too, and even tried to kill him back in the 1950s).

I have to admit when I first heard beforehand that the main storyline of this film was a mega-monster battle, my anticipation deflated just a bit. Pitting Godzilla against an increasingly-ridiculous variety of foes was always the corniest part of most of those old films. Were they really gonna attempt to do the same thing in this century, only with better special effects and classier actors?

But ironically, this is when Godzilla becomes great, partially because it masterfully builds tension with a surprisingly smart story, but mainly because our title creature is not presented as a hero here to save humanity. In fact, Godzilla doesn’t appear to give two shits about us. He’s just as destructive as the MUTOs; we’re all just collateral damage resulting from these creatures' hatred of each other. In a way, this makes Godzilla every bit the anti-hero as Clint Eastwood’s Man with No Name. When these monsters finally start fighting (fairly late into the film), I kept thinking this was everything Transformers should have been but wasn’t…rousing fun that proves you can make a bombastic, effects-laden blockbuster without dumbing things down for the booger-eaters in the crowd.

I’ve not-yet mentioned any characters or actors in the film. That’s because, in the long run, they’re perfunctory. Aside from a few morose moments early on (when highly-touted cast members die much earlier than their billing suggests), they play second-fiddle to the monsters and the destruction left in their wake. Characterization is arguably the weakest aspect of the movie. In fact, writing this now, I couldn’t tell you a single name without looking it up.

Two hours later, Lucy and I came out of the theater with our ears ringing and big dumb grins on our faces.

“That was awesome!” she chirped more than once, and I had to agree. Godzilla wasn’t just an awesome monster movie…it was an awesome movie. After Francie and Natalie (by oldest daughter) picked us up, Lucy and I talked about it during the entire drive home, mostly to each other, though I think our gushing praise of the movie made Francie begin to regret she didn’t give the big ol’ lizard one more chance.

But that’s okay. I’m glad I had the privilege of seeing it with Lucy, my horror buddy and the one member of my family who’d appreciate it the most. We had a great time and I hope she doesn’t grow up so fast that we can’t do this again sometime.
Posted by D.M. Anderson at 11:50 PM