The Perfection of BAD DAY AT BLACK ROCK 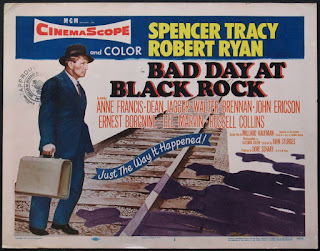 If you had to name one film you'd consider "perfect," what would it be?

I don't mean the greatest film. Any movie worth considering for perfection is great by default. For me, the greatest film of all time has always been Jaws, but it ain't perfect (though it's damn close).

A perfect film, though? I would define that as a film with absolutely no technical or creative flaws of any kind. It's free of plot holes and lapses in logic. There are no throwaway scenes, redundant characters or questionable casting decisions. The direction, performances, editing, writing, cinematography and score are all spot-on.

If I had to pick a film that meets all that criteria, the first one that immediately comes-to-mind is 1954's Bad Day at Black Rock.

Director John Sturges is renowned for some sprawling epics (a few of which are among my favorite films), but with Bad Day at Black Rock, he gives us a lean, mean mash-up of film-noir and classic western, trimmed of all the fat and presented with such narrative efficiency that not a single one of its 81 minutes is wasted.

On paper, Spencer Tracy seems an odd choice for the role of John MacCready, a deceptively docile stranger who gets off a train in the tiny town of Black Rock, stirring up the locals while inquiring about a missing war buddy. But he hits all the right notes, congenial and passive at first, only to grow increasingly determined as he begins to uncover the town's terrible secret. The remainder of the cast nail their characters as well, including a menacing turn by Robert Ryan as Black Rock ringleader Reno Smith. Then there's the lovely Anne Francis...not exactly a femme fatale here, but I've had a crush on her ever since seeing Forbidden Planet as a kid.

The seemingly simple narrative unveils its layers at precise moments throughout the film, providing just enough exposition to keep it rolling forward, but remaining intriguingly ambiguous about certain character or plot complexities until it's absolutely necessary to reveal them. Right up until the resolution, the story is filled with surprises (and absolutely no red herrings).

From a technical standpoint, I've personally never noticed anything I'd have done differently. Despite the film's relatively intimate setting, the cinematography makes tremendous use of the CinemaScope format, particularly the establishing shots. Each scene is flawlessly staged and edited, every setting perfectly chosen. The town and surrounding desert are practically secondary characters.

And of course, Bad Day at Black Rock is enormously entertaining. I've seen it dozens of times over the years and always notice something new that makes me appreciate it more. It may not be the greatest film - though it's high on my list - but it is a perfect film.

MEE-OW! LIKE TAUNTING A MOUSE TO DEATH
Posted by D.M. Anderson at 10:41 PM