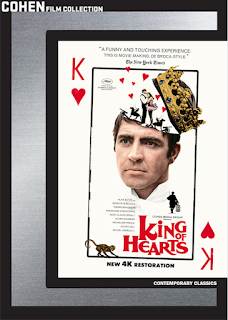 COHEN FILM COLLECTION TO RELEASE 4K RESTORATION OF DARK COMEDY CLASSIC
'KING OF HEARTS' ON BLU-RAY, DVD AND DIGITAL
Director Philippe de Broca's film, which brought a modern 1960s sensibility to a story set during World War I, laid the groundwork for such dark war comedies as How I Won the War and M*A*S*H. Scottish soldier Private Plumpick (Oscar nominee Alan Bates, The Fixer, Women in Love, Far From the Madding Crowd) is sent on a mission to a village in the French countryside to disarm a bomb set by the retreating German army. Plumpick encounters a strange town occupied by the former residents of the local psychiatric hospital who escaped after the villagers deserted. Assuming roles like Bishop, Duke, Barber and Circus Ringmaster, they warmly accept the visitor as their "King of Hearts." With his reconnaissance and bomb-defusing mission looming, Plumpick starts to prefer the acceptance of the insane locals over the insanity of the war raging outside.
Since its 1966-67 release, KING OF HEARTS has become a worldwide cult favorite and stands out as one of the most memorable films by Philippe de Broca (That Man From Rio, Dear Inspector). The superb cast also includes Oscar nominee Geneviève Bujold, Jean-Claude Brialy, Michel Serrault, Adolfo Celli and Pierre Brasseur. The score is by Oscar winner Georges Delerue (Contempt, Jules and Jim).
Posted by D.M. Anderson at 1:42 PM