Who Put the "Red" in RED SPARROW? 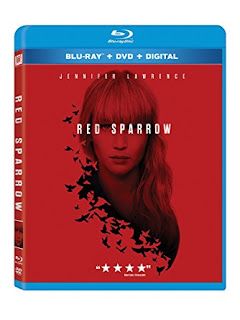 
AVAILABLE ON BLU-RAY & DVD FROM

"Sparrows" of the title are young Russian men & women who are trained to use seduction and sex to snare potential enemies. One could cheekily assume "Red" also refers to the film's copious amounts of torture, violence and bloodshed. Trailers made Red Sparrow look like another Atomic Blond or John Wick, but it isn't as much gonzo fun as either of those, and not-so-much an action movie as it is an alternately intriguing and convoluted spy thriller,

Jennifer Lawrence is Dominika, a ballerina who suffers a horrific leg injury during a performance. No longer able to dance, she has no way to make a living or care for her ailing mother. Her uncle, intelligence agent Ivan Egorov (Matthias Schoenaerts), takes advantage of her desperation by giving her the opportunity to join the Sparrow program and become a spy. Though repulsed by what she learns at "whore school" (her words), Dominika proves to be a natural and is promptly assigned to get close to American spy Nate Nash (Joel Edgerton) in order to discover the identity of a Russian mole he's been working with.

Complications ensue, of course, thanks in-no-small-part to Ivan's cold-blooded indifference to the constant peril in which he places his own niece. Not only does he consider her completely expendable, he also turns out to be one of those "pervy" uncles. This leads to a subplot in which Domikia decides to help Nate catch an American senator in the act of selling secrets to the same people she's working for.

A lot of this is pretty interesting, though patience is often required. Lawrence certainly gives her all (in more ways than one) for what one could consider a fairly bold performance. However, Dominika isn't a terribly compelling character, going from zero to deadly seductress without allowing the viewer to get as invested in her initial predicament as we'd like. While it's a given in a film like this that she'd eventually bump uglies with Nash, their relationship is never as compelling as the increasingly unnerving one between Dominika and her uncle.

Red Sparrow doesn't have a lot of action per se, though there's an abundance of sex and violence in equal measures. The early sparrow training scenes are lurid and border on exploitative, with Charlotte Rampling camping it up as a domineering headmistress. Dominika is raped, beaten and tortured early and often, but also dishes-out her own fair share of pleasure and pain. Storywise, the film is sometimes confusing and unnecessarily complicated. But just when our interest threatens to wane, we're snapped back to attention with a major plot revelation or suspenseful set-piece. And even though the movie is probably a half-hour too long, it does serve-up one hell of a satisfying twist ending.

Though not undone by relatively flat characters, Red Sparrow could have benefited from developing them a bit more to justify its length (not to mention Lawrence's uninhibited efforts). The story is occasionally all-over-the-place, but there are just enough captivating moments, exciting turns and hard-R nastiness to make the film worth checking out.