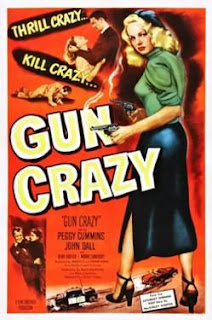 How many of you even know who the hell John Dall was?

In 1948's Rope, Dall seemed like the kind of guy who threw snowballs at strangers, taunted the handicapped and took fraternity hazings too far. That supremely punchable face, coupled with his character's cold-blooded arrogance and chilling disregard for humanity, made Brandon Shaw one of Hitchcock's greatest unheralded movie villains. Rope may have had Jimmy Stewart's name above the title, but Dall completely owned the film. It's a remarkably chilling performance.

In a perfect world, John Dall would have, at the very least, had a long, prolific career playing a variety of despicable douches...sort-of a Miguel Ferrer of his time. Instead, he died at age 50, having only appeared in eight movies, mostly in supporting roles (though he did do a lot of theater and television during his short career). Fortunately, Gun Crazy gave Dall the rare opportunity to show he was more than capable of carrying a movie without making the audience hate him.

His character is no hero, though. In true film-noir fashion, he's more-or-less a troubled sort whose life spirals out of control due to piss-poor choices for the sake of a woman.

Bart Tare (Dall) has been a gun lover his entire life. As much as he loves shooting them - he's a hell of a good shot - Bart detests the thought of actually taking a life, stemming from a childhood incident when he shot a small animal. As a teen, his obsession leads him to actually steal a gun, resulting in four years at a reform school.

Following a stint in the military, Bart returns home and reunites with childhood friends, Dave and Clyde. He also meets his soulmate, Annie Laurie Starr (Peggy Cummins), a sharpshooter performing with a traveling carnival run by her sleazy & jealous boss, Packett (Barry Kroeger). Bart briefly joins the carnival as well, but after thwarting Packett's attempt to rape Annie, the two venture off and get married. Soon they are broke, and at Annie's urging, they embark on a cross-country crimewave, robbing stores, banks and eventually a company's payroll, which gets the FBI involved. Though Bart doesn't want to hurt anyone, Annie has no qualms about killing anyone who gets in their way.

It's a timeless story told with a lot of flare and Gun Crazy is a superior example of modestly-budgeted film-noir. By far, the best scene features the couple driving into a small town, robbing the bank and escaping capture, all in one lengthy, unbroken take, shot from the backseat of their getaway car. It's as technically impressive as Hitchcock's similar method method for shooting all of Rope.

But even the most stylish film-noir is nothing without its morally questionable characters, and Dall is especially effective. Bart's no saint - nor the brightest crayon in the box - but Dall instills the character with an increasing sense of remorse over the couple's escalating actions, making it difficult not to feel sorry for this poor rube, doomed from the moment he lays eyes on Annie. Sure, he ultimately brings all this misery on himself, but Dall's performance assures us Bart was never a truly bad man...just a conflicted one.

Alas, Gun Crazy was John Dall's last film in a leading role. As good as he was, either no one else would give him another shot or he simply preferred the stage. Or hell, maybe he was as face-punchingly insufferable to work with as Brandon Shaw at a dinner party. Whatever the case, Gun Crazy is a fast-moving, exciting and suspenseful classic that plays just as well today as it did 70 years ago, and a fine showcase one of Hollywood's most criminally underused actors.

MEE-OW! LIKE TAUNTING A MOUSE TO DEATH
Posted by D.M. Anderson at 5:08 PM