ANNIHILATION and the Great Sci-Fi Game 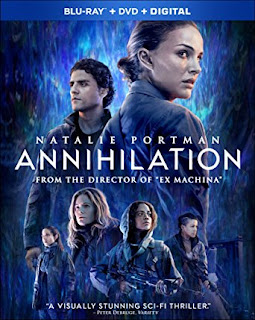 AVAILABLE ON BLU-RAY & DVD FROM
PARAMOUNT

When it comes to the sci-fi game, Alex Garland knows how to play his cards, perhaps better than anyone else at the table right now. His screenplays for Sunshine, 28 Days Later and Dredd were winning hands even before his directorial debut, Ex Machina. That winning streak continues with Annihilation, an equally-trippy little mind-bender.

A meteor impacts the southern coast and unleashes a bizarre, anomalous phenomenon known as "The Shimmer," which is slowly expanding and threatens humankind unless it can be stopped. The government has repeatedly sent troops and scientists inside, but no one ever returns, including Kane (Oscar Isaac), the husband of Lena (Natalie Portman), a former soldier, now a cellular biologist. Kane is presumed dead, yet Lena is unable to move forward with her life...

...that is, until he shows up one night, offering no explanation to where he's been for the past year. Kane's also extremely sick, and he & Lena are whisked away to a government facility located just outside The Shimmer. An all-female team, led by psychologist Dr. Ventress (Jennifer Jason Leigh), is scheduled to go in next. Wanting to know what happened to Kane - perhaps hoping to save him - Lena volunteers to join them.


Indeed, there is something alien inside The Shimmer, an intangible force that's responsible for, not only the deaths of previous soldiers, but physically changing the surrounding environment. It isn't quite clear whether or not it's a conscious entity, though it does have the power to manipulate time and scramble the DNA of the living things it surrounds, resulting in some bizarre - and dangerous - hybrid lifeforms (both plant and animal). As the mission continues, the team themselves start falling prey to numerous attacks, physiological changes and paranoia.

The story is told mostly in flashbacks and we learn quite a bit about Lena's motivation for putting her life at risk, as well as the nature of her relationship with Kane. The remaining team is more broadly-drawn, though it's established that they all volunteered because, in their eyes, they have little left to lose. The viewer also gets the impression that - for some characters - this is a suicide mission.

Like Ex Machina, Annihilation is driven more by its characters and concept than spectacle, while still providing stunning visuals we've never seen before. The Shimmer is an interesting creation...translucent, deceptively bright and colorful, belying its adverse effect on the environment. Even when we don't actually see it, we feel the menace of its presence all around these characters. Garland has also put together a smart story (based on a novel by Jeff VanderMeer), knowing which narrative cards to play, when to play them, and which ones to keep close to the vest. The most compelling sci-fi films never lay all their cards on the table and Annihilation follows suit, leading to a climax and denouement that leaves the viewer justifiably uneasy.

I do have to call Garland's bluff with one nagging question, though. If The Shimmer, which is continually expanding, is already so massive that the entire surrounding area has been evacuated, how could the government keep it a secret from the general public? That's a minor quip, though, and having an answer wouldn't make the film any more compelling than it already is. Garland still has a winning hand here. Deliberately-paced but never boring, Annihilation shuffles a fascinating premise into a smart story with plenty of surprises. It's the kind of intelligent, discussion-worthy science-fiction that's worth visiting more than once.

MEE-OW! LIKE BEING TURNED LOOSE IN A BIRD SANCTUARY
Posted by D.M. Anderson at 10:22 PM