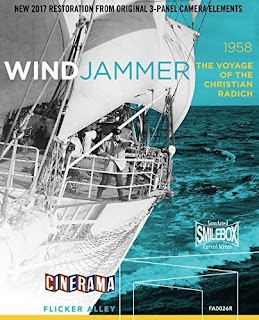 This is one case where the backstory, production and restoration of a film is more interesting than the film itself...

"Cinemiracle" was a format similar to Cinerama, utilizing three projectors to present a single image on a giant curved screen. Windjammer: The Voyage of the Christian Radich ended up being the only film produced in this format. Cinerama later bought Cinemiracle and pretty much ended that rivalry before it started. Afterwards, Windjammer re-releases were formatted to Cinerama.

As for the movie, Windjammer is a documentary that chronicles the training voyage of a crew of young boys onboard the Norwegian sailing ship, the Christian Radich. It's a very long trip - as is the film - with numerous stops in various ports like Madeira, the Caribbean and New York, where we follow the crew as they take in the sights and frolic with the natives (including Arthur Fiedler).

This was undoubtedly pretty amazing on the massive screens it was intended for, and the Blu-Ray restoration - including the "Smilebox" presentation - is as close to that experience as you can get. If nothing else, the film looks and sounds wonderful. But at home, two-and-a-half hours of what's essentially a travelogue can occasionally be an endurance test. The sailing sequences definitely deliver the goods, but hanging out with this crew of bland, blond Norwegian clones sometimes slows things to a crawl (though the goofy voice-over narration offers some unintentional laughs).

While Windjammer isn't Cinerama's best film, this is a typically-loaded disc from Flicker Alley, with a batch of bonus features that are arguably more engaging than the feature itself. Viewing these first might even increase the viewer's overall enjoyment of the movie..or at least make them appreciate it more.

EXTRA KIBBLES
"THE WINDJAMMER VOYAGE: A CINEMIRACLE ADVENTURE" - Running nearly an hour, this retrospective doc is the best of the bonuses.
"THE RECONSTRUCTION OF WINDJAMMER"
BREAKDOWN REEL - A film originally shown to keep audiences amused whenever one of the projectors broke down.
"THE CHRISTIAN RIDICH TODAY" - Yeah, the old ship is still around!
2 GALLERIES - One of production stills, the other of theaters that showed the film.
TRAILER


SUPPLEMENTARY BOOKLET - With an essay by Randy Gitsch