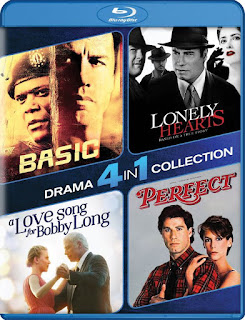 Few in Hollywood have tried to stick a fork in their own careers as often as John Travolta. While the guy has come back from the dead more than once, he's really only done two classics we'll still be talking about 50 years from now: Grease and Pulp Fiction (and maybe Face/Off if you twist my arm). In between there have been scores of good films, blockbuster films, forgettable films, paycheck films and more than his fair share of "what-the-hell-were-you-thinking" career killers.

This collection contains no classics, but Travolta's filmography being what it is, any otherwise-comprehensive sampler needs to include one of those career killers. We get a doozy here in the ironically-titled Perfect, a total trainwreck that purports to be an expose on the fitness club scene, but is mostly an excuse to parade sweaty, gyrating bodies. This is was 80s, where any trend was a potential high-concept blockbuster, capable of selling as many soundtrack albums as movie tickets. Flicks like this were Travolta's bread-&-butter at the time, but not even playing dueling torsos with Jamie Lee Curtis could mask the stench of desperation in every scene. The film oozes with every garish excess we typically associate with the decade, and remains as morbidly fascinating as it is unintentionally funny.

Basic is the one good film in the collection, also noteworthy for being the last movie John McTiernan directed before torpedoing his own career. Say what you will about his subsequent life choices, the man did give us Die Hard, Predator and The Hunt for Red October (so...a moment of silence, please). Basic isn't in the same league as those classics, though it is a fairly solid Rashoman-style mystery thriller. Travolta is amusing as a cynical ex-Ranger brought in to investigate the alleged murder of his former CO (Samuel L. Jackson) by one or more of his team during a training exercise. After a clunky start, the movie keeps the viewer guessing and remains just intriguing enough that we overlook some of its implausibilities. But sorry, Pulp Fiction fans...Travolta and Jackson reunite for only one scene.

If the remaining two films don't ring a bell, it might be for good reason. A Love Song for Bobby Long is character study probably intended as an actor's showcase, which would be fine if the characters were interesting. But despite decent performances (including a young Scarlett Johansson), the film doesn't resonate much. Lonely Hearts is a fictionalized retelling of the hunt for the "lonely hearts killers," a couple responsible for murdering several women in the 1940s. The film alters between their exploits and two detectives who take the case (Travolta and the late James Gandolfini). Though well made, interest peaks and wanes at regular intervals, and the same story was told much more effectively in The Honeymoon Killers.

Neither of these last two films scrape the bottom of the barrel where the likes of Battlefield Earth dwell, but in a way, that's almost worse. They're both ultimately forgettable, like most of Travolta's recent output. The high-camp hijinks in Perfect are far more memorable, as are the twists and turns in Basic. It's only too bad one of his classics or blockbusters weren't included in this collection. Then it  would be an accurate microcosm of his entire career.