SILVER STREAK and the Archaic Express 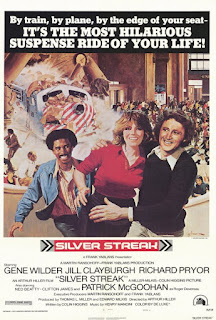 My god, I'm turning into my grandmother...

She was a voracious reader, consuming so many novels that when she visited the bookstore, she sometimes bought a new paperback, only to discover a few pages in that she'd already read it.
I've reached that point with my movie collection, acquiring so many that I've taken to storing a lot of them in boxes in the garage (at my wife's behest, since the family room was beginning to look like an episode of Hoarders). Lately, there have been a few occasions when I bought or ordered a new one, momentarily forgetting that I already owned it.
So I downloaded an app that catalogs DVDs and Blu-Rays, spending the better part of a weekend scanning the barcodes of each and every one of them. It was exhausting and somewhat eye-opening. When all was said and done, the total was just under 1,600. Before you declare me obsessive, I only actually paid for about half of those. The rest were screeners sent to me by studios and PR groups in exchange for written reviews. Still, when you multiply 800 by the average cost of a new movie - say, $20, give-or-take - that amounts to nearly 16,000 bucks I've shelled-out on movies over the last 25 years or so. I could've bought a decent fucking car for that amount, or treated my wife to an extravagant European holiday...twice (I chose not to mention that factoid to her, though).

But it ain't like I blew sixteen-grand on heroin, and one positive about going through all those boxes and bookshelves was that I came across movies I hadn't watched or even thought about in years. In fact, I hauled a bunch back into the house to relive the good times, sort of defeating the purpose of de-cluttering the family room to begin with. One of those titles was 1976's Silver Streak, a childhood favorite.

Seeing Silver Streak again after so many years, the first thing I noticed was how badly it has aged...kind-of like bumping into someone you haven't seen in decades and being taken-back over how old they've become (which, of course, means you have, too). The movie practically screams “1970s” with every frame, from the bell-bottom slacks, to the bad hair, to the politically-incorrect dialogue, to the presence of Ned Beatty, right down to the visual effects and music score. Still, I loved it as a kid, mainly for the massive train wreck at the end and the running gag of Gene Wilder screaming “son of a bitch” every time he's thrown off the train.
Wilder plays George Caldwell, a mild-mannered publisher who decides to travel by train (dubbed the Silver Streak) from L.A. to Chicago so he can unwind. En route, he meets Hilly (Jill Clayburgh), a secretary for a professor who's just written a book about Rembrandt. After getting to know each other over dinner (which includes a lot of cringe-worthy innuendo), they return to her cabin, where George sees her dead boss briefly hanging outside her window. No one believes him, including Hilly, but the next day, when he goes to check on the professor, he's tossed off the train by a couple of thugs who work for Roger Devereau (Patrick McGoohan), a ruthless art dealer looking to discredit the professor (who has evidence that Devereau's Rembrandt paintings are fakes) by replacing him with a lookalike.
After being thrown off the train a second time (during which time he's framed for killing a federal agent on Devereau's tail), George befriends car thief Grover Muldoon (Richard Pryor). Together, the two work to get back on-board, save Hilly and expose Devereau's nefarious plans, all while trying to avoid capture by the police, who think George is a murderer. This leads to a wild gunfight and chase, where the now-runaway train is barreling toward Chicago on a collision course with the station.

Being that Silver Streak was made at the height of the disaster movie craze (still my favorite genre), one must assume part of the reason for the movie's existence is the climactic train crash, depicted in loving, destructive, slow-motion detail. It feels gratuitous and tacked-on, being completely non-essential to the story. But, damn, was it cool on the big screen in 1976! It isn't nearly as convincing now, though still pretty nifty. Maybe the powers-that-be assumed the plot itself wouldn't be enough to draw in moviegoers (and they might have been right, since the story itself is pretty generic cloak-and-dagger).
That leaves the appeal of the cast to maintain interest for ninety minutes until the destructive payoff. For the most part, I guess they succeed. Until this film, Wilder got a lot of mileage out of eccentric, slightly unhinged roles. He's certainly likable here, but sometimes seems out his element as a romantic hero. Pryor is amusing, though his comic skills are diluted compared to the legendary concert films he did around the same time. Even so, Silver Streak is the funniest of the four films he and Wilder did together. Of all the performances, McGoohan comes off best, playing the role fairly straight and menacing...he's a terrific villain.

Again, the movie is awfully dated, more-so than many of the other 70s classics I still enjoy. The scene where Pryor shows Wilder how to pass for a black guy was one of Silver Streak's comic highlights back then, but uncomfortably embarrassing now, as is the liberal use of the 'N' word. The same goes for Ned Beatty as an oversexed federal agent; some of his lines while hitting-on on Hilly - or discussing how trains turn women on - borders on misogyny.
Still, revisiting Silver Streak after all these years was an interesting trip down memory lane. The film holds a lot of nostalgic value and I enjoyed as such. But it was also a sobering reminder of just how drastically things have changed since 1976, both culturally and aesthetically (not-to-mention the sad realization that most of the cast is now dead).
Posted by D.M. Anderson at 12:36 PM