ORCA is Melville for Morons 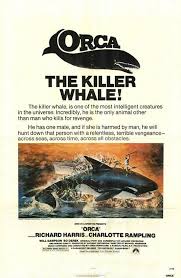 Maybe one of the reasons Jaws continues to be hailed as one of the greatest movies of all time is because of the countless imitators that followed. Some were good, most weren't and a few of them achieved a level of dubious immortality by virtue of their sheer ineptitude. Even four decades later, just about every nature-run-amok movie ever made mostly serves to remind us how perfect Jaws really was.

Orca is one of many angry animal flicks that immediately followed in Jaws' wake, even managing to snag a fairly respected director. Michael Anderson was responsible for such minor classics as The Dam Busters, Around the World in 80 Days and, more recently, Logan's Run, his first box office hit in a long time (it would also be his last). In other words, he was Martin fucking Scorsese compared to the level of talent that usually called the shots for these plagiaristic pictures.

The film is also noteworthy for being the film debut of Bo Derek. Though her appearance was heavily hyped in later home video releases, Orca was made before 10 displayed her "raw" talent, to be later exploited by voyeuristic husband John Derek, who spent the rest of his career ogling her with a Panaflex. Here, the closest thing we come to seeing Bo's flesh is when her leg gets bitten off.

There's a also some novelty in the fact that we root for the whale right from the get-go. Cheering for movie monsters to crunch on the cast is nothing new. That's why we pays our two bits. But Orca establishes the titular creature as an aquatic Charles Bronson, out to avenge the death of its family at the hands of the biggest asshole to sail the high seas since Captain Ahab.

Unfortunately, Orca makes two fatal mistakes. First, it tries too hard to be a message movie when it should be big, dumb popcorn entertainment. The result is alternately depressing and unintentionally funny. Second, and more damning, some behind-the-scenes idiot apparently decided we should later empathize with the bad guy (though that doesn't ever happen).

Richard Harris plays Nolan, an Irish sea captain who sees profit to be made in capturing a live killer whale and selling it to an aquarium, to the consternation of Rachel (Charlotte Rampling), a marine biologist who's passionate about respecting the intelligence of the species. Nolan inadvertently harpoons a pregnant female, killing both her and her unborn calf. This scene is really fucking disturbing, especially today, when most of us now view killer whales as the Pandas of the sea. It's so unnervingly graphic, drawn-out and difficult to watch that it renders later attempts to make Nolan sympathetic a waste of time.

Nolan's actions unleash the wrath of the whale's mate, who starts picking off his crew one-by-one. Nolan docks in a fishing village for repairs, but the whale follows him, sinking all the other boats as a challenge for Nolan to return to sea and settle their feud once and for all. The local villagers want Nolan to leave, as well - with the whale present, they are unable to fish - but he stubbornly refuses. Like I said...this guy really is an asshole.

The whale persists, wreaking havoc on the village itself. Eventually, Nolan feels he has no choice but to confront the vengeful mammal, partially due to the carnage the whale has inflicted, but mainly because he suddenly feels like a kindred spirit. Nolan reveals he also lost his family due to someone else's carelessness when his pregnant wife was killed by a drunk driver. This supposed revelation is suddenly supposed to have us give a shit about Nolan?

Uh...sorry, but I can't go there. The calf-killing alone makes the man  irredeemable. Hell, even Francis Ford Coppola had to create an entire third Godfather movie before we could forgive Michael Corleone for killing Fredo. Michael Anderson is no Coppola, and forcing us to draw unfavorable thematic comparisons to Moby-Dick doesn't help his case.

The movie is technically competent (though the exact same footage of the whale leaping from the water is used repeatedly), with adequate direction and special effects. Some of the early attack scenes, while far-fetched, hold the promise of more Jaws-like suspense. But Orca eventually flounders because it bites off more than it can chew (no pun intended). We spend a lot of time listening to Harris and Rampling discuss the nature of intelligence, as well as the need for retribution and/or vengeance, when all we really want to do is watch this whale kill people (even if one of them is Bo Derek).

Where the movie takes another wrong turn is its logic, asking us to accept the superior intelligence of the whale, which is fine until he attacks the village for the first time. In one scene, not only is the whale aware he's breaking open a gas line, he also knows which nearby shack contains a lantern that would ignite the spilled fuel. The performances in Orca ain't gonna make anyone forget Scheider, Dreyfuss & Shaw anytime soon; Harris comes off best, but even his performance wavers uncomfortably between low-key & introspective to overwrought & hysterical.

I don't know if I'd necessarily call Orca a bad movie, though it certainly features some moments that approach high camp. It also takes itself way too seriously for a movie about a marauding mammal. But while it's obviously clear why Jaws is a classic and this one decidedly isn't, there are plenty of similar films of the era that are far worse.

I still ain't forgiving Nolan, though. No way.
Posted by D.M. Anderson at 9:56 PM