ODDS AGAINST TOMORROW and the Unfortunate Bunny 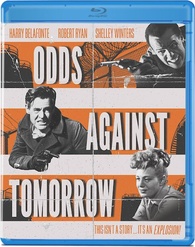 The most interesting scene in Odds Against Tomorrow comes late in the film. As one of the characters is waiting to partake in the planned robbery of a small-town bank, he spots a rabbit emerging from a log. He raises a rifle to shoot it, drawing careful aim. Suddenly, his expression softens as he lowers the gun, perhaps contemplating the purpose in killing this animal. A few seconds later, he shoots it anyway.

Not only is the scene indicative of the character, Earl Slater (played with intensity by Robert Ryan), it effectively encapsulates the appeal of film-noir. Given the choice between two options, people will generally choose the worst one. Had Slater not shot the rabbit, it would suggest an epiphany, which we generally don't want in our noir (at-least until it's too late). But with that brief moment of contemplation before firing, we witness the last of what little humanity Slater has left.

Until then, Odds Against Tomorrow is fairly standard film-noir. Ex-con Slater, musician Johnny Ingram (Harry Belafonte, the protagonist by default, since he doesn't blow-away a bunny) and disgraced former cop David Burke (Ed Begley) are three desperate New Yorkers getting ready to rob a small-town bank. Johnny's reluctant at first, but the mob is breathing down his neck for gambling debts. Slater resents being supported by his girlfriend (Shelley Winters) and sees this as his last chance for a big score before he's too old to feel useful. Burke is the mastermind, but spends much of the time keeping the peace between Slater and Ingram (the former is a bully and a racist).

We learn about the planned heist in the very first scene, but then the story detours for long stretches to establish Slater and Ingram as their own worst enemies. The problem is most of our sympathy for either man dissipates more with every scene. Ironically, we learn the least about Burke, who seems to be the most desperate of the three. One would think a cop's fall from grace would warrant more elaboration, but unfortunately, he's often regulated to a peripheral character until the climax.

The film comes to a fitting conclusion, though no real surprise. Aside from touching upon themes of racism, Odds Against Tomorrow is a workmanlike example of film-noir. Solid performances, effective black & white cinematography and good direction by Robert Wise (just before West Side Story launched his career into the stratosphere) make it watchable, though not particularly distinctive.