BLACK PANTHER: The Women of Wakanda 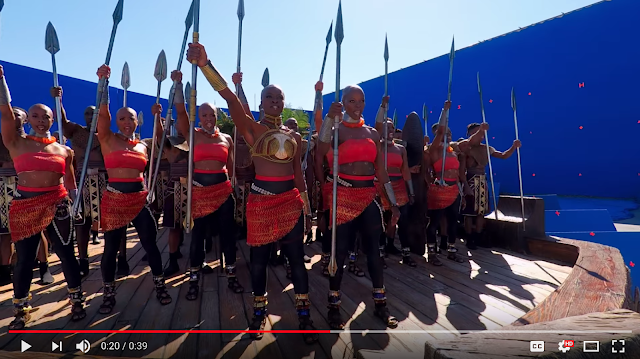 Available Digitally in HD, 4K Ultra HD™ and Movies Anywhere on May 8 and on 4K Ultra HD™, Blu-ray™, DVD and On-Demand on May 15.

THE WOMEN OF WAKANDA

PRESS RELEASE: The in-home release of Marvel Studios’ Black Panther is packed with bonus material including deleted scenes, outtakes and never-before-seen featurettes. The highly-celebrated story of a young African prince named T’Challa (played by Chadwick Boseman) has thrilled and inspired generations of moviegoers around the world, and dominated box office charts. Black Panther be

To celebrate the in-home launch of the mighty Marvel movie, we chat to the cast and crew about the women of Wakanda, which is the subject of one of the exclusive bonus features: The Warriors Within. Look no further if you want to get to know Wakanda’s women and the amazing actors who portray them…

LUPITA NYONG’O [NAKIA]
“I love the way Black Panther represents women. Each and every one of us [in the movie] is an individual. We all have our own sense of power and we hold our own space without being pitted against each other. I think that’s a very, very powerful message to send to children – both male and female.

“In Black Panther, we see women going about their business and supporting each other. They argue with each other and have different points of view, but they are not pitted against each other and I think that’s extremely important. In doing this, audiences can get a sense of the fabric of Wakanda as a nation, where we see women alongside men and we see how much more effective a society can be if they allow women to explore their full potential.

“Cinema has the potential to show us who we’ve been, who we are, and who we could be – and Wakanda is an example of who we could be. This is a nation that has been allowed to self-determine because it has avoided the interruption that colonialism was; that assault on a culture and the imposition of a new culture on another. It has figured out how to develop on its own terms. And with that development, it seems they have figured out how to allow their citizens to realize their fullest potential, which means that women can hold their power and not compromise or jeopardize the man’s power. In Wakanda, a woman can assume her own power – but she can also stand with and in support of the man at her side.

“We can see that with the character of Black Panther, who is this all-powerful, vibranium-wearing guy who has Okoye [played by Danai Gurira] by his side. He also has a confidant in my character, Nakia. She’s someone that he can listen to and consider on a level plain. I think that’s really cool to see. I love the way that you get to see it unapologetic and unexplained; it’s just the way it is in a country you’ve never visited before. I feel like this gives you a glimpse as to what is possible in the real world.”

DANAI GURIRA [OKOYE]
“When [Black Panther director and co-writer] Ryan Coogler sat me down and talked to me about his vision for the movie, the story, the characters – and the women – I was floored because you don’t get to hear stories like this very often. It’s not often that you sit down and hear that type of a vision. It was amazing.

“There are so many great things I could say about how Ryan developed the women characters in the movie. I feel really blessed and excited by the fact he allowed us to collaborate, too. I love the fact that these women from the continent are very developed and very complex. I remember thinking, ‘Wow, this is something else. I just want to watch it, but now I also get to be in it.’

“I was immediately drawn to the idea of the Dora Milaje [an all-female, special forces security team]. I loved the concept of them, but it was incredible to see them come to life [during pre-production]. I started to train with all these astounding women and then we all started to get our heads shaved for the movie. I was the first to have it done, but then all the girls started coming in with no hair. One-by-one, we’d all been balded – but we were united together. That’s when our pride started to grow. We all started to embrace this symbol of power in these women.

“I love the moment in the movie where Okoye doesn’t want a wig. She doesn’t want to cover up her head. This is her joy and her pride, so she wants to walk in there with her bald head and that tattoo. I thought that moment was so subversive. It’s so subversive in the right way to say that you don’t have to have hair to be beautiful.” 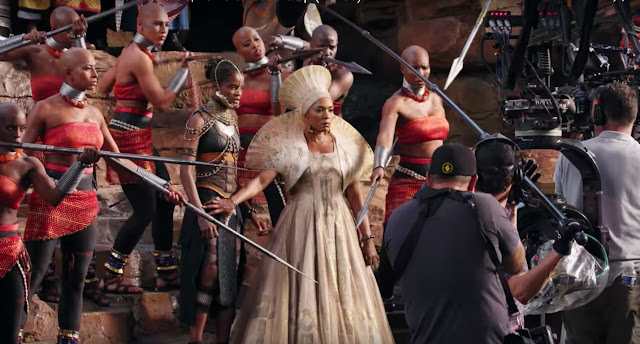 LETITIA WRIGHT [SHURI]
“I think it’s great to see so many strong women in Black Panther because there’s a lack of them in cinema right now; especially black female characters. All these female characters in the movie are really well rounded, too. They are not just written one way. The women have a lot of complexity. It was really refreshing to see and it’s inspiring to be part of it, because it means a lot to me.

“I also love the way that the men are always behind the women in Wakanda. Nobody is undermined by the other sex. The men don’t stand around and say, ‘Shuri, you shouldn’t be into technology and math.’ They’re like, ‘No, go ahead.’ T’Challa says, ‘Go ahead, Sis. This is your department. This is your domain. Do your thing. Stay in your lane.’ I love that that’s the mentality of the king. It’s brilliant. Everybody’s got their own lane.

“I love what Marvel has done with this movie. They are saying that women are just as great as the men. It’s not one or the other. There’s a dope balance.”

FOREST WHITAKER [ZURI]
“I love the fact that there are many different types of strong women in the movie. Not only are there these amazing women warriors who show the world that women are powerful – but they have a warrior spirit to conquer, as well as the ability to find the tools and strength to navigate and win.

“The power of motherhood is displayed by Angela Bassett’s character [Ramonda] and the way she nurtures her children. She moves her son and daughter forward, and she’s willing to do anything to make sure they are well and right.

“Then there’s Shuri, who shows everyone the technology of this world. She illustrates the fact that women can be adept with technology and math; the movie recognizes that attribute inside of women. These are very powerful statements to the world.”

MICHAEL B. JORDAN [ERIK KILLMONGER]
“In Wakanda, the matriarchs are the backbone and the foundation on which the country is built on, and the men lean on their women for guidance and strength. I think it’s extremely important for little girls and women out there to see themselves represented in a positive, strong way in film and television – and I think Wakanda does it really well. I think Black Panther is amazing in that respect.

“There are a lot of strong female characters in this movie. The fiercest warriors are all women. The king’s private guard – the Dora Milaje – are all women. That was something that [director and co-writer] Ryan Coogler and [co-writer] Joe Robert Cole wanted to depict in the story.

“In African culture, the women are the backbone of society and they have such a positive influence on everyone. To not put a strong representation of that into the film would be a crime because we wanted to stay true to reality.

“We have some very talented black women in this film, with Lupita Nyong’o, Danai Gurira and Angela Bassett. It was incredible to work alongside them – although I think the character of Shuri [played by Letitia Wright] is my absolute favorite in the movie. I think Shuri is amazing. She’s incredibly smart and witty, and her one-liners are awesome.”

DIRECTOR AND CO-WRITER RYAN COOGLER
“When you look at African culture, you’ll often see gender roles that are different from the norm. You’ll find issues with gender dynamics in African culture in the same way you do in other cultures, but you’ll also find things that are different. Strong women and women’s influence on culture and society is something that cannot be overlooked. That was something that we really wanted to include in the movie, although it’s something that was present in the Black Panther comics as well.

“T’Challa’s mother, Ramonda, is a constant influence on his world. And T’Challa’s relationship with his sister is one of the more unique relationships in comic book films and action films. It was something that we looked at because there’s no super hero with a little sister – but Shuri is possibly the most important relationship in his life. That was something that we really wanted to explore. And then you have the Dora Milaje, who are these elite warriors in the country and it’s all women.

“This film had involvement from brilliant women from start to finish. They weren’t hired because they were women; they were hired because they were the best people for the job. That includes our cinematographer, Rachel Morrison; our costume designer, Ruth Carter; our production designer, Hannah Beachler; and our assistant director, Lisa Satriano. In post-production, the film was edited by Michael Shawver and Debbie Berman, who is from South Africa. I was blessed to work alongside these incredible women and to have their perspective and their fingerprints all over the project.”
Posted by D.M. Anderson at 1:37 PM