A BUCKET OF BLOOD (1959): Everything's Better with Dick (Miller) 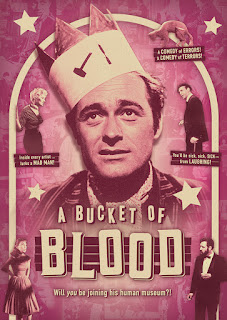 AVAILABLE ON DVD FROM
OLIVE FILMS

Who doesn't love Dick Miller? Not only has the guy been in every movie ever made, he's the sole reason anyone knows what the hell a Kentucky Harvester is.

Everyone had to start somewhere, and decades before he became Joe Dante's good luck charm, Miller was Roger Corman's go-to guy. The two made dozens of drive-in delights together, and only Corman ever saw fit to cast him in lead roles.

One such film was A Bucket of Blood, a micro-budget horror comedy that features Miller as Walter Paisley, the dimwitted young busboy of an ultra-hip coffee bar where artists and poets hang out. To them - as well as his boss, Leonard - he's a fool. But Walter wants to be an artist just like them, mostly to impress co-corker Carla (Barboura Morris). When he accidentally kills a cat, Walter gets the idea to cover the animal in clay and claim it as his first sculpture, which he calls Dead Cat.

Dead Cat is a hit with the locals, who now praise Walter as a genius. So he continues making his "art," murdering several hapless folks and turning them into sculptures. Leonard soon discovers what Walter's been doing, but seeing potential profit, he decides to host an exhibit of the kid's work rather than turn him in.

A Bucket of Blood is typical Corman of the time. Shot cheaply and quickly, the film has a twisted sense of humor that helps the viewers overlook its technical shortcomings, making it sort-of a kindred spirit to the more legendary Little Shop of Horrors (which was shot on many of the same sets). Miller, of course, goes all-in with a wonderfully goofy performance.

At only 66 minutes, A Bucket of Blood doesn't stick around long enough to wear out its welcome. The gruesome premise and satiric jabs at the pretentious art scene make this a fun little flick.
KITTY CONSENSUS: