IT'S ALIVE and the Miracle of Birth 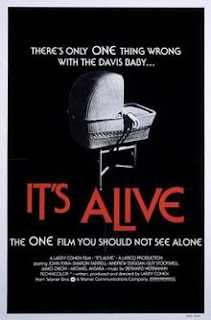 Man, I was born twenty years too late. Had I met my wife and knocked her up back in 1974, I'd have been spared the grotesque reality of childbirth.

Don't get me wrong...I love my children more than life itself and am ultimately glad I was there when they arrived. But when my first daughter popped out from between the stirrups with her squishy, misshapen skull, unseeing eyes rolling in their sockets and body covered in gelatinous goop, my first thought was whatthefuckisthat?!? For a brief second, she reminded me of that mutated monster from It's Alive. On the plus side, at least she didn't kill everyone in the delivery room.

I always thought Larry Cohen was an interesting filmmaker. He's been around a long time and worked in many genres, but mostly specializes in schlocky, low-budget horror movies. A majority of them aren't any good (he seems to have no sense of pacing and his pictures are often terribly edited), but the ones that work, such as Q - The Winged Serpent, show a writer/director trying like hell to make more than just another monster movie. Yeah, he knows he's making junk, but it's often quirky, imaginative junk with subtly satiric touches and casts better than material like this usually deserves. His cult classic, It's Alive, is another one of those.

The Davis family (John Ryan & Sharon Farrell) are expecting a second child. When the moment arrives, they happily drive to the hospital for the delivery. Frank Davis remains in the waiting room with other anxious fathers, smoking cigarettes and socializing. This scene dates the movie far worse than the god-awful leisure suits Ryan is forced to wear (or the fact he's smoking in a hospital). Unless an expectant father is also expecting an immediate divorce, absolutely no husband in this day and age would fucking dare to kick-back in the waiting room while the wife purges his handiwork. We're expected to be there from the moment the water breaks until the cutting of the cord. Since we're half the reason she's now forced to push a bowling ball through a garden hose, I suppose that's fair.

We were taught breathing and coaching techniques as well, but all that training flew out the window when it was my wife's turn. And as graphic as those Lamaze videos were, they were inadequate in preparing me for the real thing. My wife is the love of my life, beautiful inside and outside. But about halfway through this 12-hour ordeal, she looked like a heroin addict suffering from the DT's.

When Natalie finally emerged, her head resembled an elongated, snot-coated Liberty Bell, the result of the doctor using some kind of weird plunger to pull her out. I was horrified, ready to sue the entire staff's asses off for mangling my child. A nurse promptly assured me that, since their skull bones aren't yet fused to at birth, babies often emerge from the womb with funny-looking craniums (my second daughter's head resembled a boomerang).

Afterwards, Francie didn't have the radiant glow of motherhood. Holding our first child, she looked more like she just went ten rounds with Connor McGregor. As for Natalie...her head quickly returned to normal almost as quickly as a stress-ball, but her unfocused eyes kept randomly rolling around in her skull like a malfunctioning Disneyland animatronic.

Fortunately for him, Frank Davis wasn't subjected to any of that horror, though an intern does spill out of the delivery room with his face torn to shreds. Frank runs in to find the hospital staff slaughtered and his wife, Lenore, screaming in her stirrups (the scene is actually pretty intense for a PG-rated movie). It turns out they've given birth to a mutant monster, which has escaped the hospital and is now running loose in Los Angeles. Natalie never did that, even after she got her driver's license.

Police follow the trail of dead bodies in search of this butt-ugly urchin, while Frank and Lenore try to come-to-grips with the fact they'll have a tough time ever finding a babysitter. The media hounds them, Frank loses his job, Lenore Davis grows increasingly distraught - and eventually protective of this baby (yeah, it's a monster, but she's still its mother). An embittered Frank is initially as gung-ho as the police to kill the thing, especially since it's trying to find its way home.

I remember the TV spots for the movie when I was a kid...the camera slowly panning around a cradle to reveal a misshapen claw hanging out, with an ominous voice-over intoning, “There's only one thing wrong with the Davis baby... it's alive. Don't see it alone...please.” That trailer is scarier than anything in the film itself, which is typical low-budget Cohen...clumsily-shot, erratically-paced and atrociously edited.

But there's a bit more at-work in It's Alive than cheesy thrills. Cohen seems to have something to say about the nature of parenthood, as well as the use of fertility drugs (though the latter isn't adequately explored). Also rising above the schlock is a remarkably earnest performance by Ryan (much like Michael Moriarity would do in Cohen's Q). Ryan is probably best known for his manic turn in Runaway Train, where he played a sadistic prison warden. The guy has always reminded me of a car salesman or shoe-sniffing pervert. Here, he appropriately displays slow-burning intensity. When he confronts his “son” for the first time, Ryan does a tremendous about-face, simultaneously conveying disgust, remorse and empathy. For a Larry Cohen film, it's an uncharacteristically poignant moment.
As for the baby itself...we seldom get a clear look at it, which is probably a good thing. An early creation by make-up legend Rick Baker, it isn't a very convincing monster. The film works better when using sound effects to convey its presence.

It's Alive is an enjoyable Larry Cohen freak show, despite the polyester and archaic depiction of a husband's role during childbirth. Revisiting the film today, watching Frank pacing the waiting room is almost as surreal as that old Winston cigarette commercial with The Flintstones. I had completely forgotten that a man's role in childbearing was once regulated to the fun part, then passing out cigars nine months later.
Posted by D.M. Anderson at 11:10 PM