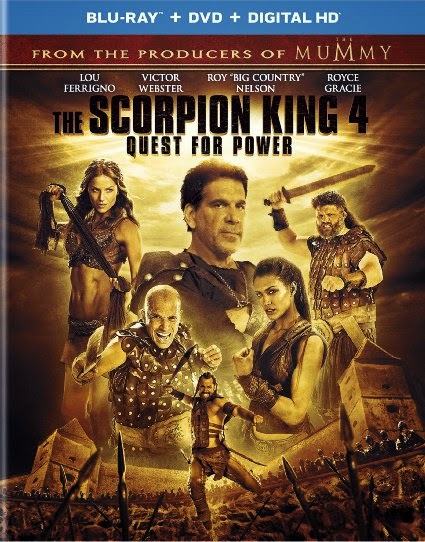 To be honest, I barely recall there was a Scorpion King 3, since I pretty much lost all interest when the franchise decided to continue without Dwayne Johnson. But you’ve gotta hand it to the producers of these direct-to-video sequels…they do their best to load the cast with as many famous faces as they can afford with their meager budgets.

And Scorpion King 4 offers a slew of familiar B-list actors and personalities from both WWE and UFC. However, like Lou Ferrigno, prominently listed above the title and featured at the center of the box cover art, most of the folks you’ve actually heard of appear for only a few minutes at most. The actual star of the film is Victor Webster as the title character, reprising his role from Scorpion King 3. While he’s no Dwayne Johnson, Webster isn’t bad at all. He certainly looks the part and gives an amusingly laid-back performance, as does co-star Ellen Hoffman, the only cast member prominently featured on the cover who has a substantial role, probably because she looks great in a leather bikini.

Like most direct-to-video sequels, it helps if viewers keep their expectations low. Scorpion King 4 plays like a Xena episode with a slightly bigger budget, meaning it’s often quite funny (both intentionally and unintentionally). This healthy sense of humor goes a long way in making the film fairly enjoyable if you’re in the right frame-of-mind. It ain’t high art - or even high-concept - but also makes no pretension of being so.

Either you accept the film for what it is and go with it, or don’t even bother. For example, if you find yourself wondering how the hell a character hailing from the era of Egyptian pharaohs could possibly be saving the day in medieval Europe, you’ve chosen the wrong movie. But if you’re like me, occasionally in the mood for some dumb, unpretentious fun, you could do far worse than The Scorpion King 4.