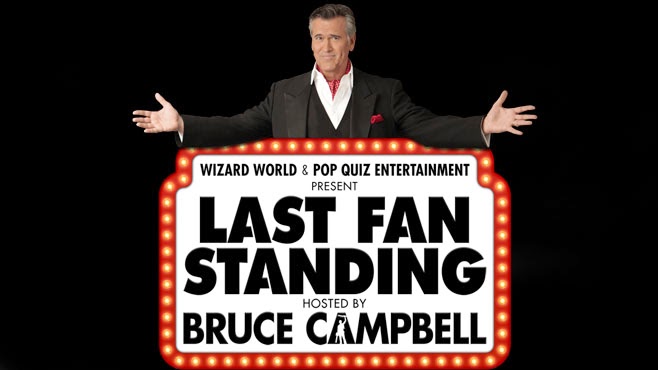 The good folks at Moviepilot were gracious enough to arrange for me to cover all three days of the Wizard World Comic Con in Portland, OR. I was honored, excited and nervous all at once, because even though I’ve been around a while (probably longer than most of you reading this), I’ve never actually attended a Comic Con before, never cosplayed or hung around those who do (although my youngest daughter, because of my long hair and beard, suggested I cosplay as Jesus).
Still, I was up for the challenge, and for the first day of the Con, since most of the celebrity Q&A panels were scheduled for Saturday and Sunday, I planned to mingle and see what was there, get some pix of some of the more impressive cosplayers and sit-in on a few of the events scheduled for the evening.
But, alas, I feel like I may have let Moviepilot down on this first night. Sure, I met some folks with awesome costumes, and was in awe of the vendor booths which filled the Oregon Convention Center (it’s truly movie-TV-comic-geek heaven). But then I got distracted like Dug the Dog spotting a squirrel when they announced Bruce Campbell’s new game show, Last Fan Standing, would be beginning in a few minutes.
Oh, hell yeah! I just had to cover this!
Last Fan Standing is a new program which will soon air on ConTV, a channel dedicated to all-things pop culture geeks love. It’s similar to Jeopardy, except contestants are chosen from the audience through a preliminary trivia quiz, where everyone is given a clicker to respond to a series of multiple choice questions related to movies, television and comics in the sci-fi, fantasy and horror genres. The top eight scores get to compete onstage, four per game during the two episodes taped each day at Wizard World Comic Cons across the country.
With Bruce Campbell as the host, how could I resist? I’ve been a huge fan of Campbell ever since Evil Dead 2, and this would be a great opportunity to get some photos of him.
But when I showed up at the ballroom where the show was about to begin taping (showing my press credentials), I was simply handed a tiny clicker and told, “You’re playing.”

I got some applause from the audience (I wasn‘t the ‘popular’ win, probably because I displayed the personality of a plate of shrimp), but more importantly, I got a vigorous handshake from Bruce Campbell, the man I was initially hoping to simply get a decent picture of. He lead me and Comic Dude backstage for more pictures and handshakes. Bruce told us both how great we were, probably because of the down-to-the-wire suspense we inadvertently created for the show. Still, it was Bruce who dictated the backstage photos, one with me and Comic Dude, and one with just me and him. Even though he is the obvious star, he took time to genuinely compliment both of us on a job well done before being whisked away by his managers. Shortly afterwards, a producer was asking me for my address and phone number because I was getting $500 for winning the game. Wow! I wasn’t expecting that!
Yeah, I showed up as a member of the press, and yeah, I participated in the game as a fan. But as someone who’s met and interviewed a few celebrities as a writer, I can assure you that Bruce Campbell is a class act, a nice guy who truly appreciates his fans. I didn’t get the interview or photo op I wanted. Instead, I got to hang out with him onstage with countless fans watching. This was a truly unforgettable experience I’ll cherish forever (at least until the show airs and I see how awful I am on TV). If Wizard World Comic Con comes anywhere near you, do yourself a favor and come to one of the Last Fan Standing shows, because you never know. Maybe you’ll end up shaking hands with Bruce Campbell as well!
Anyway, the show ended after Day 1 of Comic Con was over, and Last Fan Standing took up most of the time I was originally planning to use covering the overall event. I’m sure the folks at Moviepilot will understand that sometimes you gotta throw away your press pass, give-in to your inner fan and bow to the alter of your idols.
In this case, Hail to the King, Baby!
Posted by D.M. Anderson at 10:11 PM