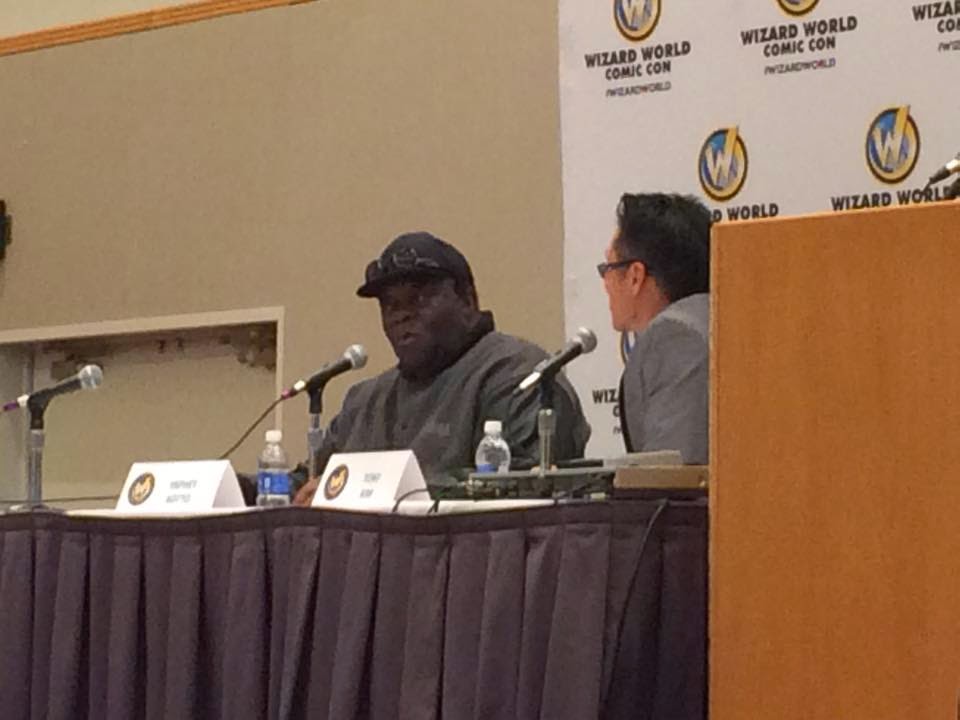 Of course, no comic-con would be complete without plenty of Q&A sessions with various celebrities from TV, movies and (for reasons which still escape me) WWE. Rising stars, cult heroes and living legends were in abundance at this year’s Wizard World Comic-Con in Portland, signing photos each day and appearing for Q&A sessions in many of the spacious ballrooms of the Oregon Convention Center.
The quandary one faces when attending these things is deciding which Q&A you want to attend first, since many were held at the same time. Being more of an old-school movie fan, one man I definitely wanted to check out was the legendary Yaphet Kotto, he of Alien fame and distinctive voice, one of the great character actors of all time. In addition to Alien, he was the main villain in the James Bond film, Live and Let Die, as well as one of Arnold Schwarzenegger’s sidekicks in the goofy-yet-oddly-prophetic camp classic, The Running Man. Personally, my favorite film of his is Midnight Run, where he plays beleaguered FBI agent Alonso Mosely, and hoped I’d get the opportunity to ask him about it. But his resume extends back much further, before most people attending the comic con were even born. How could this not be fascinating?
Arriving a few minutes early, I was somewhat taken-back by how few people showed up in the ballroom to see him…maybe 50 or 60 (compared to the hundreds next-door to cheer-on one of the actors from the CW series, Arrow). Sure, Kotto may not be starring in a currently hot TV show, but this was Parker from Alien, for chrissakes!
Anyway, Kotto arrived shortly afterwards (looking pretty damned good for a man of 75), along with the Q&A moderator, who got the ball rolling by asking about the seminal film of most interest to comic-coners, Alien. Kotto congenially discussed how he came into the classic role, telling us he knew it was special just by reading the script. Aside from Sigourney Weaver as Ripley, Kotto’s performance as Parker was arguably the most memorable, and he was more-than-happy to talk about it (including the infamous chest-burster scene, in which none of the cast besides John Hurt knew was coming).
One thing I was fascinated to learn during the discussion was Kotto’s early career, nurtured and influenced by the likes of Barbara Stanwyck and Mary Astor, legends whose names were likely completely lost on the average fan in attendance. He also expressed a particular fondness for the theater, often declaring stage work as his preferred method of acting to film or television (explaining, in detail, the difference between the two).
When the panel finally opened up to audience questions, I shot my hand up and was first called upon. Although the film isn’t really of interest to the average comic con fan, I just had to ask about Midnight Run (in my humble opinion, one of the funniest movies of all time). To me, it looked like it was a blast to make, with Kotto working alongside such stars as Robert DeNiro and Charles Grodin, and every actor given free reign given to improvise whenever appropriate. If you haven’t seen this film, Kotto’s performance is angry-yet-amusing, and some of his deadpan, icy stares are priceless. I totally expected him to gush about how much fun he had.
But instead, he informed me Midnight Run was actually a particularly problematic film for him, since he was suffering from high blood pressure, fever, lengthy 18 hour shoots and a director (Martin Brest) who required an excruciating number of takes for every scene. As a film fan, this was a revelation. I always had the impression Midnight Run was tons of fun for everyone involved.
Inevitably, stupid questions were asked, such as the moderator bringing upThe Running Man, which no one really loves, and Kotto freely admitted was comic book tripe that he did for the money. Even worse was another member of the audience, obviously trying to sound intelligent & politically correct with a race-bating question about the struggle of “minority actors” in Hollywood. Kotto promptly responded that there are no minority actors (just actors of different races), and that he’s never personally experienced racism in his career. Another idiot tried to goad him for his opinion about how the director of Selma was denied an Oscar nod. But Kotto would have none of that, vehemently and articulately declaring, as a member of the voting academy, the best film of 2014 is American Sniper.
As the Q&A drew to a close, I felt like I got first-hand insight about an actor I’ve respected for years, one who values the thrill of the performance over celebrity status and doesn’t give a shit about being African-American. I enjoyed his tales of stage and screen immensely, yet am somewhat sad more folks at the comic con didn’t care enough to listen to this living legend. Their loss, I guess.
Posted by D.M. Anderson at 8:27 PM