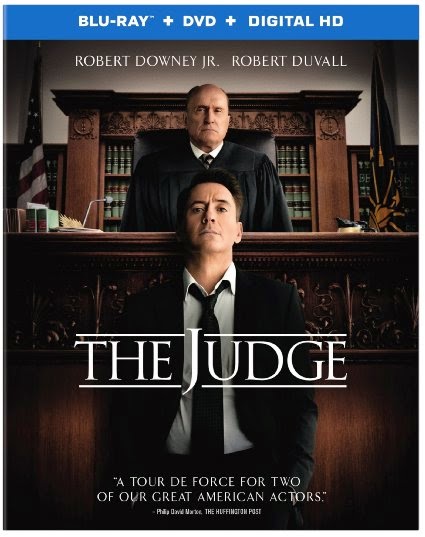 Some movies you just have to check out simply because of the names over the title, regardless of what it’s about. The Judge is one of those actors’ showcases in which two Roberts (Downey Jr. & Duvall) square-off as an estranged father and son, and they are almost the sole reason this film well worth seeing.

Downey plays Hank Palmer, a hot-shot big city defense attorney who reluctantly returns to the small town where he grew up in order to attend his mother’s funeral. While he still gets along with his two brothers (Vincent D’Onofrio & Jeremy Strong), the same cannot be said for his dad, Joseph, the presiding judge in that town for over forty years. To say they have an antagonistic relationship is putting it mildly.

Then Joseph is implicated in the vehicular death of a scumbag former defendant he once made the mistake of giving a second chance. Prosecutor Dwight Dickham wants Joseph tried for murder, which ultimately forces Hank to represent his own father in court, even though Joseph doesn‘t initially want his help. Hank's time back home also allows him to reconnect with all those he once left behind.

It’s these relationships (especially between Hank and Joseph) that are the real crux of the film, not the perfunctory trial. Those who love the snide wit Downey brought to Tony Stark will find some of that here, but he shows he’s still capable of considerable depth when required. As Joseph, Duvall shows yet-again why he’s one of our greatest actors, deserving of his seventh Oscar nomination for this role. So good are these two together onscreen that we tend to forgive the underdeveloped secondary characters and predictable plot turns, the latter of which might have been reduced to sentimental schmaltz in lesser hands.

Downey and Duvall ultimately make The Judge worth seeing. The story ain’t much, but these guys keep things continually interesting, even with the film’s lengthy running time.