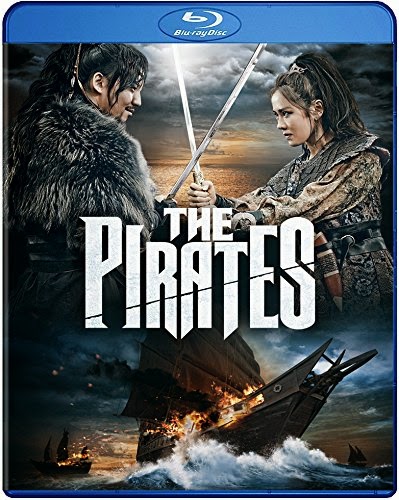 I don’t know anything about the history of Asian piracy, nor do I care. I doubt the makers of South Korea's The Pirates cared either, since it is obvious from the get-go this film is more about action, explosions, romance, comedy and spectacle than anything resembling historical accuracy. But as viewers, we’re better off. A true ‘kitchen sink’ movie, The Pirates throws everything at the wall to see if it sticks. As such, it’s wonderfully entertaining and arguably better than any of the godawful Pirates of the Caribbean sequels.

In 14th Century China, the emperor’s royal seal establishing the Joseon Dynasty ends up being swallowed by a whale (!). Soon after, just about everybody with a boat is on the hunt for this whale, government agents hoping to save face, pirates and bandits looking for a big score, and a couple of characters bent on revenge on those who betrayed them (even though they deserved it). Most of the focus is on Jang Sa-jung, leader of a group of mountain bandits, and Yeo-wol, the female pirate captain. They hate each other at first (of course), but since they are the only characters too good looking to be marauders or pirates, anyone who’s seen even a few similar Hollywood epics knows where this relationship is heading.

Meanwhile, The Pirates bombards us with hyperkinetic swordplay, wild chases, narrow escapes and several unexpected moments of slapstick comedy (the most memorable being a great white shark capable of dragging a boatload of bandits through the sea faster than a jet boat). Everything is well choreographed and amusing, and while the ample use of CGI to depict epic scenes of destruction is fairly obvious, we’ve already been swept along by the story and its characters, so who cares?

Most importantly, The Pirates is a lot of fun. It’s the kind of movie you walk away from with a goofy grin on your face, knowing what you just watched was ultimately ridiculous, but would have been less enjoyable otherwise.