BACK TO THE FUTURE PART II: Where the Hell is My Hoverboard? 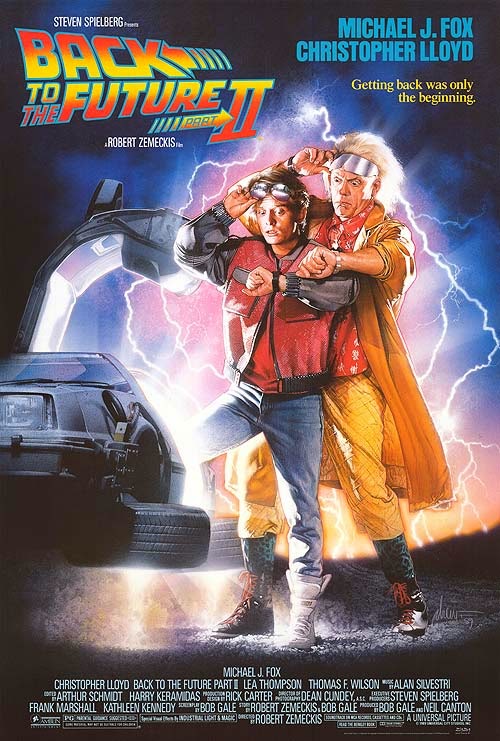 As of this writing, it is the first day of 2015. When I was a little kid, this date wasn’t just the future, but the distant future, the sci-fi future, when we would all be buzzing through the sky in flying cars, have robot servants and fight our battles with laser guns. Men would wear bell-bottom jumpsuits, while their women strutted around in silver lipstick, go-go boots and mini-skirts. We’d have ventured far into space, colonized other worlds and met-or-fought alien races.

When Hollywood eventually decided the distant future would actually really suck, we got an overpopulated world where we were forced to eat crackers made from people, kill everyone on their 30th birthday and send folks to prison for having more than single child. We’ve turned New York into a maximum security prison, declared independent thought illegal and nuked ourselves into oblivion (hundreds of times). We’ve murdered each other for the gasoline in our vehicles and died by the millions after our own machines have turned against us.

Hollywood didn’t always inform us exactly when all this shit would go down, but sometimes we were told. By that reckoning, it’s now been 14 years since we ventured out to Jupiter to figure out what the hell a black slab floating around in space was trying to tell us, 18 years since Snake Plissken escaped New York, 19 years since Khan Noonien Singh ruled over a quarter of the world and 24 years since apes revolted to overthrow the human race. More ominously, it’s only four years before rogue replicants run rampant through L.A. (Blade Runner) and seven years before Grandpa becomes part of our nutritious breakfast (Soylent Green), at which time we are also permitted unleash our aggression during the annual Purge.

Obviously, none of these past-future events have occurred, nor are they likely to. We’re nowhere near creating android likenesses of ourselves; the closest we’ve come is a robot vacuum cleaner that still can’t get into those cracks and crevices where dust bunnies dwell. We haven’t ventured past the moon (not because we can’t, but because we’ve got no economic reason to). And though our population has hit the seven-billion mark, we aren’t-yet ready to dine on each other.

Like every other year of this fairly new century, 2015 is not shaping-up to become the dystopia we once feared (though I wouldn’t put that to a vote). At the same time, it’s also not the 2015 depicted in Back to the Future Part II, released 25 years ago when today was still relatively distant. No flying cars, no self-drying clothes, no Nikes equipped with power laces, no Jaws 19 and, most distressingly, no hoverboards.

Granted, Back to the Future Part II’s vision of the future makes no pretense of accuracy or logic. It’s more of a parody of what 1950’s Hollywood once assumed the future would look like (with some sharp jabs at then-current 1980’s pop culture thrown in for good measure). Hence, the presence of flying cars, arguably the most iconic image virtually everyone envisions of the sci-fi future (mostly thanks to movies). On the other hand, the film did accurately predict wall-sized flatscreen televisions with multi-channel capability, video chat systems like Skype and a Major League Baseball team in Florida. But most importantly, Back to the Future Part II is one of the few films since 1968 to depict the future as a pretty awesome place.

Still waiting on the damn hoverboards, though.

But regarding those flying cars, I’m torn between wishing I had one right-the-hell-now and praying they never become a reality.

Personally, I’d love nothing more than to jump into my “hover converted” Durango and leap to work in a matter of minutes, or cut that annual three-hour Thanksgiving trip to my mother-in-law’s house to a fraction of the time.

However, such technology would only be ideal if it were available exclusively to me. Not to sound arrogant or anything, but I have a pretty decent self-assessment of my own driving capabilities, and the thought of sharing the sky with the rest of the free world scares me shitless.

Anyone who’s ever spent a considerable amount of time in the driver’s seat can surely attest to the fact there’s an enormous percentage of the population who have absolutely no business getting behind the wheel as it is (you know, the geniuses trying to text, eat and drive at the same time). Do we really want these dinkfuckers flying over our heads, where their idiocy would likely result in, not only countless deaths from mid-air collisions, but endangering everyone on the ground due to the fiery debris raining back to Earth? Simply put, allowing every mouth-breathing booger-eater who passed a driving test carte blanche to fly the friendly skies is a bad fucking idea.

Then again, maybe I’m not quite thinking this scenario through to its logical conclusion. Perhaps a world where flying cars are commonplace would ultimately be a good thing. If, as Hollywood has often foretold, overpopulation is a possible threat to our foreseeable future, then it stands to reason rendering everyone airborne would cull the herd considerably. Sure, many drivers whose heads aren’t permanently lodged in their asses might pay the ultimate price, as would those on the ground unable to dodge the constant daily barrage of flaming auto parts dropping from the sky. But this decrease in the population would mean there’d always be plenty of food for the rest of us, so we’d never be forced to convert the dead into tiny green Triscuits in order to feed everybody.

Now that I’ve thought this through, bring on the flying cars! Then feel free to text, talk and scarf-down that morning danish while you steer with your knees during your morning commute 500 feet in the air. By doing so, you’re inadvertently saving us from a dystopian hell Hollywood has been warning us about for decades.

Or, at the very least, let us have one of those hoverboards. We’ve made it to 2015 without blowing each other up. Surely us future-dwellers deserve at least one perk.

The mini-skirts and go-go boots would be pretty cool too.
Posted by D.M. Anderson at 8:57 PM