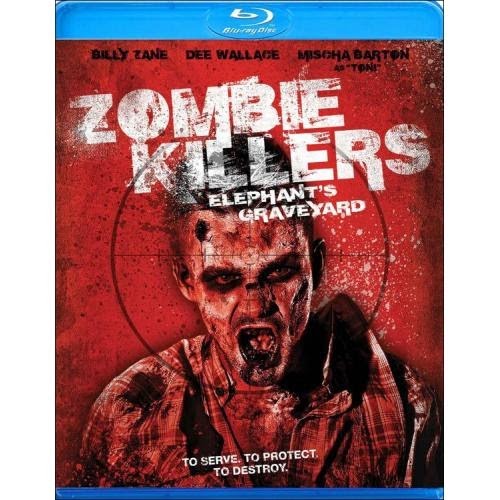 The nonsensically-titled Zombie Killers: Elephant’s Graveyard isn’t badly made (unlike inept opuses ‘directed’ by would-be Romeros in the woods behind their houses). In fact, the overall performances are fairly decent for a low-budget film, especially Billy Zane, who gets to do a bit of scenery-chewing as a gung-ho military vet. The story also aims for a Walking Dead vibe, taking its zombies seriously (when they actually show up) and the conflicts within the fenced encampment where the story takes place.

These few virtues are also the biggest problem. None of these characters (and their clashes with others) are remotely interesting, and for a movie which so prominently features paint-ballers as defense against the undead, it takes itself waaay too seriously. Additionally, Zombie Killers commits two unforgivable crimes which can‘t overlooked. First, we hardly see any zombies for the first hour, and when they finally do show up en masse, the film is completely devoid of the gory thrills even the most-brainless undead epics offer as compensation for their stupidity. It could probably air on SyFy uncut.

It’s hard to imagine anyone getting much entertainment out of this. Too few zombies and too little gut-munching for the yahoo crowd, yet deadly-dull as drama for those spoiled by the brilliance of The Walking Dead. What's ultimately sad is the premise had the makings for a terrific zom-com. This is a truly missed opportunity.

EXTRAS: Featurettes: Bloodbath & Beyond; The Look of Zombie Killers; Behind the Scenes