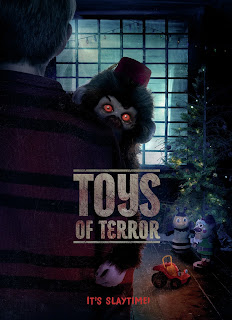 There’s certainly no shortage of movies using childhood playthings as a source of horror fodder, and for the entire first act, there’s not much to distinguish Toys of Terror. The characters, performances and setting are perfunctory...nothing remarkable, but nothing glaringly awful. However, there’s one aspect of the film that makes it somewhat unique this day and age.

The basic plot is pretty generic. A family decides to spend Christmas in an old victorian mansion they just purchased. As shown in the prologue, it used to be a children’s hospital, but something awful happened when an old toy chest arrived in the middle of the night. Naturally, two little kids find the chest. Naturally, it’s filled with a variety of creepy old toys. And naturally, the toys are homicidal.

Here’s where the film will be great fun to anyone who fondly recalls the days before CGI. All of the toys are brought to life through good old fashioned stop-motion animation, and not with the meticulousness of a Laika film (or even a certain Full Moon Features franchise). Perhaps reflective of its budget, the animation is on par with what you’d see in old Rankin-Bass holiday specials. In a way, the toys’ staccato movements sort-of renders them more charming - if not a little creepier - than anything that could be created with a laptop.

When focused on the antics of these toys - especially a remote control car probably intended to resemble Speed Buggy - the movie is kind of enjoyable. They sing, they swear, they kill, they encourage the two youngest children to ruin Christmas by destroying all the gifts. Unfortunately, the story drags on longer than it should and sometimes turns unnecessarily serious, such as a somber resolution where there should have been some kind of amusing punch-line.

The special effects are the main reason to check out Toys of Terror, and probably only for those who appreciate the old school effort to utilize stop motion animation. That means anyone who ever had a good laugh at the expense of Ray Harryhausen’s legendary work will find nothing worth enduring here, since what remains is a story they’ve seen before.

FEATURETTES - “Toys of Terror Come to Life” (about the stop-motion animation process); “A Terrifying Weekend: Making of Toys of Terror” (Interviews and behind-the-scenes).