AFTER THE THIN MAN Should Be on Your List 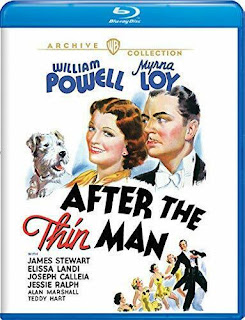 A lot of writers and websites really have no business putting together “all time” lists. Case-in-point, The Thin Man series, six films released between 1934 and 1947, almost never shows up on anyone’s list of the greatest film franchises of all time. Since this series was hugely popular, critically revered, influential and consistently profitable, it’s obvious that some people’s definition of “all time” is limited to their time. Shame on them.

But Warner Archive Collection has been gradually restoring and releasing the series on Blu-ray for movie lovers to discover (or rediscover). Following the terrific 2019 release of The Thin Man comes the second film, which is every bit as funny and charming.

Like the original film, the plot is an intriguing mystery with some interesting twists, but what makes it truly memorable are the performances, characters and witty dialogue. The chemistry between Powell & Loy is magical, as is their affectionate, quasi-antagonistic banter. The humor is both sophisticated and broad, with enough clever throwaway lines that catching everything in one viewing would be a tall order.

There are plenty of other things to love here. Asta makes a welcome return - and more screen time - as Nick & Nora’s pampered pooch, who’s dealing with an unfaithful mate of his own. We also meet Nora’s family, none who think too highly of Nick and his profession as a “flatfoot.” As Nick amusingly demonstrates, the feeling is mutual. We’re also treated to the one and only James Stewart in an early role that’s a far cry from his congenial persona and “nice guy” characters.

Best of all, as with the first film, After the Thin Thin isn’t simply entertaining for its time. With characters and humor that would be engaging in any decade, the film is only dated by its physical age, which should never dissuade any self-respecting cinephile. Nicely restored with a smattering of bonus features from the same era, this classic is a must own andthe entire Thin Man series should be mandatory viewing before creating any kind of  “all time” list.

“THE EARLY BIRD AND THE WORM” - MGM Cartoon short

MEE-OW! LIKE TAUNTING A MOUSE TO DEATH.
Posted by D.M. Anderson at 9:20 PM