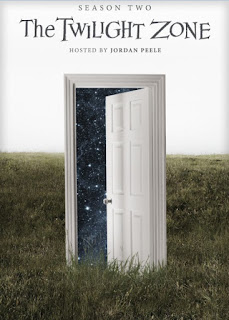 Including the 1983 movie, this is the fourth re-imagining of Rod Serling’s classic series. None of them match the original, of course. What could? Serling was a pioneer, not-only in the development of anthology television, but addressing ideas, themes and societal issues by cleverly disguising them as pulp fiction.

Still, I think he'd approve of what Jordan Peele is doing with his brainchild.

Unlike previous Twilight Zone reboots - all of which had some great original moments - this version seldom plays like a mere homage to the old show, which is ultimately a good thing. Though the basic concept and structure remain the same, the 10 episodes in Season Two achieve an overall darker tone (sometimes venturing toward black comedy). Additionally, several stories appear to draw inspiration from a variety of sources.

For example, “Downtime” plays sort-of like The Matrix in reverse, while the body-jumping aspect “The Who of You” is conceptually similar to The Hidden. “8” is essentially Alien with a super-intelligent mollusk and “Among the Downtrodden” puts a clever twist on the Carrie formula. In “Try, Try,” a man takes advantage of the same predicament Bill Murray once found himself in during Groundhog Day, only with a creepier agenda.

But it’s not all deja vu. The opening episode, “Meet in the Middle,” is a compelling love story with a vicious twist. In “Ovation,” fate gives a struggling musician more fame than she can handle, ultimately with tragic results. However, the best episode is pure Serling: “A Small Town,” which has a grieving widower who discovers the changes he makes to a scale-model of his hometown directly affect the real thing.

Aside from a couple of stories which fall flat, Season Two is a consistent batch of episodes, with horror honcho Jordan Peele assuming Rod Serling’s role as host. As such, Peele’s subtly sinister presence and commentary provides the most identifiable link between his show and the original. A few episodes are a bit overlong and purists may balk at some of the contemporary elements - namely, the language and violence - but this version of The Twilight Zone remains respectful of Serling’s legacy without simply imitating him.