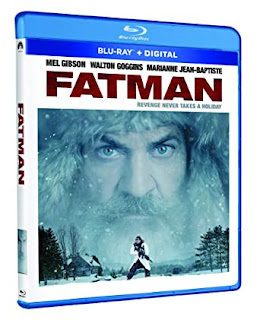 If nothing else, Fatman offers a great premise. However, what writer-directors Eshom & Ian Nelms do with it might be off-putting to some viewers.

Mel Gibson plays Chris Cringle (i.e. Santa), who’s weary and disillusioned over the state of the world, especially the increasing number of children who end up on his naughty list. Because of this, production in his workshop is down, so he’s considering accepting a government contract to produce military equipment in order to stay financially afloat and take care of his team of workers (his elves, though they’re never referred to as such).

Meanwhile, one particularly nasty kid on his naughty list, Billy (Chance Hurstfield), gets a well-deserved lump of coal for Christmas (threatening to kill a classmate who bested him at the school science fair). So he hires a cold-blooded assassin known as Skinny Man (Walton Goggins) to locate and kill Santa. The hitman also has some personal reasons for taking the job, feeling repeatedly jilted by Santa since childhood. The narrative shifts back and forth between Cringle’s crisis-of-faith and the Skinny Man’s bloody trail as he seeks his quarry, which culminates in a climactic showdown where Santa demonstrates a bit of badassery himself.

It sounds like the obvious makings of a high-concept cult comedy. However, Fatman confounds expectations by more-or-less playing it straight-faced. There are certainly moments which turn Christmas conventions on their ear, such as Cringle’s relationship with wife Ruth (Marianne Jean Baptiste) and the elves’ dietary habits, but the overall tone remains serious, as is the abundance of violence. In a way, that tends to render the whole thing more amusing.

Considering his cantankerous public persona and how grizzled he’s gotten with age, Gibson is an ideal casting choice. He also appears more invested in this role than most of his recent ones (at least he doesn’t look like he’s sleepwalking through the film). However, it’s Goggins who steals every scene, playing Skinny Man with the same detached viciousness you’d see in any serious portrait of an assassin. He even manages to make the character somewhat sympathetic near the end.

Still, anyone hoping for a preponderance of gags, punchlines or outrageousness should look elsewhere because the film is a bit slow and seldom laugh-out-loud funny (nor does it really try to be). Perhaps because I had no real expectations, I kind-of appreciated the Nelms’ less-obvious approach. Fatman probably ain’t destined to become a holiday classic, but might amuse those in the wrong frame-of-mind.