THE BUSTER KEATON COLLECTION Volume 4: Buster's Bested by a Bovine 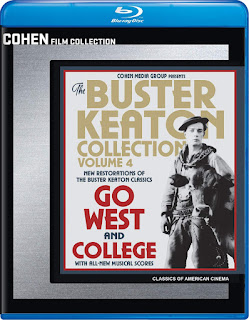 A series of amusing vignettes strung together by a reliably familiar western plot - the big cattle drive - Go West features some of Keaton’s best work on both sides of the camera. But ironically, he’s often upstaged by his co-star, Brown Eyes, the cow with whom he shares many scenes. Considering cows are essentially expressionless and none-too-bright, she’s remarkably charming. But the final act, where Keaton’s character, “Friendless,” single-handedly drives hundreds of cattle through Los Angeles, is the film's high-point and must be seen to be believed.

The second film, College, features some classic bits and I know it has more than its share of fans, but it isn’t as consistently amusing. I always felt Keaton was more affable when playing completely down-and-out characters, which doesn’t really apply to Ronald, a scholarly nerd who enrolls in a college more concerned with athletics than academics, mainly to impress Mary (Annie Cornwall), who prefers jocks to intellectuals. Though certainly enjoyable, it’s not as engaging or funny as the movie it’s paired with.

Both films have been given an impressive restoration, each with brand new music scores by The Mont Alto Motion Picture Orchestra (Go West) and Rodney Sauer (College). While I consider The General to be Keaton’s crowning achievement, Go West is another exemplary showcase of a legendary performer/director at the height of his comic powers, making The Buster Keaton Collection Volume 4 fine addition to any classic film library.

RE-RELEASE TRAILERS FOR BOTH FILMS