SNOWPIERCER - THE COMPLETE FIRST SEASON: Murder on the Snowball Express 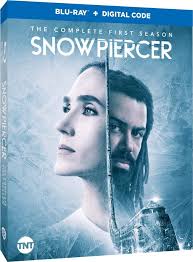 Bong Joon-ho’s Snowpiercer was the best film of 2013, an apocalyptic masterpiece as entertaining as it was thought provoking. Anyone who’s seen it would likely agree that it certainly didn’t leave the door open for a sequel, no say nothing of a weekly television series. I was especially dubious about the viability of any show with a concept that mandates a single claustrophobic setting. How do you sustain interest in something like that over the course of 10 episodes? I mean, even the Enterprise crew broke up the monotony by leaving the ship once in a while.

But damn, if I didn’t binge all 10 episodes in a single night. Snowpiercer is a surprisingly addicting show that reworks and expands the basic concept of the original film while retaining its dark complexities.

Rather than continue the same story, the series makes the smart move of creating a soft reboot with different characters and several intriguing subplots, as well as a more extensive look at the society and hierarchy that has developed on-board the 1,001-car train in the seven years since a human-induced ice age rendered Earth uninhabitable. But if one were so inclined, the show still could be viewed as a prequel of sorts, since it takes place a full ten years before the events of the movie.

There are two overall story arcs. The first is an intricate murder mystery focusing on Andre Layton (Daveed Diggs), a former cop who’s dragged from the tail section (stowaways living there are referred to as “Tailies”) to investigate a homicide in First Class. This is at the behest of Melanie Cavill (Jennifer Connelly), the head of the Hospitality department who speaks for Mr. Wilford, the enigmatic creator of Snowpiercer (and never seen). Bubbling underneath this narrative is the other story: A planned uprising by the Tailies, tired of marginalization, abuse and slave labor inflicted on them by Cavill and her Brakemen (Snowpiercer’s security force). After uncovering some horrific secrets during his investigation, Layton ends up as the de-facto leader of the revolt. The bloody conflict comprises the second half of the season.

Concurrently, about a dozen major characters throughout the train are introduced. Some are sympathetic, others despicable, but a surprising number of protagonists and antagonists walk the fine line in between, including Layton and Cavill. The perpetually moving world they inhibit is fascinating. Though most of the action takes place in a few dozen cars, there’s a clear aesthetic and social distinction between the segregated classes, as well as the squalid conditions afforded the Tailies. Additionally, the production design and special effects are terrific and more elaborate than those in the film.

Again, what’s most surprising about Snowpiercer is how consistently compelling it is, especially when taking-in the whole thing all at once (as opposed to waiting a week between episodes when it first aired on TNT). Season one comes to a satisfying conclusion while, of course, laying the groundwork for season two. I don’t know how much more creative juice can still be squeezed from the premise, but so far, so good.

FEATURETTES - “Overview”; “Class Warfare”; “Jennifer & Daveed Behind-the-Scenes Interview”; “The Train”; “Behind the Curtain: Art of the Frozen World.” These are all fairly short promotional pieces, and only the last two offer any real production details and behind-the-scenes footage (mostly related to the visual effects).