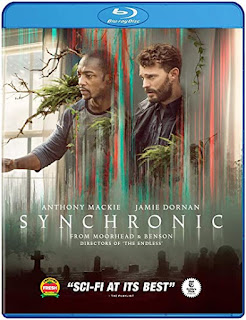 Co-directors Justin Benson and Aaron Moorhead are an interesting team. Their 2017 film, The Endless, was a fine example of complex sci-fi on a limited budget, showing you don’t necessarily need Christopher Nolan's resources when you have solid characters, a unique premise and no-small-amount of creative ambition. The film was an under-the-radar gem for those willing to look beyond the multiplex

Their follow-up, Synchronic, has a bigger budget and more impressive cast, but still puts a greater emphasis on its characters and intriguing premise than over-the-top spectacle.

Steve (Anthony Mackie) and Dennis (Jamie Dornan) are a New Orleans paramedic team and lifelong buddies. Dennis is married with two daughters, but appears envious of Steve, who has remained single with no responsibilities beyond the job. But when he’s alone, Steve doesn’t seem too happy either, exacerbated when he learns he has an inoperable brain tumor. Meanwhile, they’ve been responding to a variety of gruesome emergencies, from accidents to overdoses, all linked by the presence of old relics and a designer drug called Synchonic.

When Dennis’ teenage daughter, Brianna (Ally Ioannides), disappears after taking the drug, Steve angrily buys-up all the pills from a local smoke shop, where he conveniently bumps into the chemist that designed it, who gravely informs him of Synchronic’s dangers. On a whim, seemingly with nothing to lose, Steve takes the drug himself and discovers its major side-effect: it physically sends the user back to a specific point in time for exactly seven minutes. Not only that, where you end-up depends on where you actually take the drug, and if you don’t return to that exact location on time, you’ll be stuck in the past. This explains Brianna’s sudden disappearance.

How Steve figures out the logistics of time travel is pretty cool, though the fate of his hapless pooch is a little heartbreaking. These temporal trips are punctuated by imaginative visuals - especially the hallucinatory opening sequence - which may not be elaborate, but they’re effective enough. However, it’s the relationship between these two men that’s the crux of the story, which wouldn’t be nearly as compelling if we weren’t personally invested in them. While the performances are solid overall, Mackie is particularly good. He balances Steve’s gamut of emotions - anger, helplessness, stoicism and resolve - with a subtlety that feels genuine.

However, I haven’t yet decided if Synchronic is a better film than The Endless. On one hand, the premise isn’t quite as complex and the story occasionally relies on some contrivances to push it along. On the other hand, it’s more emotionally engaging - thanks to well-realized characters and dialogue - with technical merits that are a considerable improvement. Either way, Benson & Moorhead have put together another intriguing sci-fi film that favors smarts over spectacle.

FEATURETTES - “Making of Synchronic” (interviews with the directors and cast, along with behind-the-scenes footage); “Previsualization”; “VFX Breakdown”

“ALTERNATE ENDING” - It’s actually a joke ending made by some of the crew.