THE POOP SCOOP: A Fun February 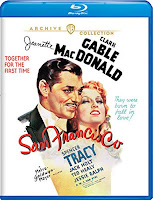 One of the first “Disaster Movies,” SAN FRANCISCO, on Blu-ray from Warner Archive Collection 2/16
Romantic drama combines with humor, star-power combines with lavish spectacle and the walls come tumbling down! This Academy Award-winning extravaganza’s street-splitting, brick-cascading, fire-raging recreation of the cataclysmic earthquake remains "one of the greatest action sequences in the history of the cinema, rivalling the chariot race in both Ben-Hurs" (Adrian Turner, Time Out Film Guide). Clark Gable plays rakish Barbary Coast kingpin Blackie Norton. Jeanette MacDonald portrays a singer torn by her love for Blackie and her need to succeed among the operagoing elite. Earning the first of nine career Best Actor Oscar® nominations, Spencer Tracy is a priest who supplements spiritual advice with a mean right hook. He urges Blackie to change. But if love and religion can't reform Blackie, Mother Nature will.

FREAKY, starring Vince Vaughn and Kathryn Newton, on Digital 1/26 and Blu-ray/DVD 2/9
Prepare for a FREAKY take on the body-swap movie which only Blumhouse, makers of Happy Death Day & The Purge franchise, could bring: a teenage girl switches bodies with a relentless serial killer! From the deliciously debased mind of writer-director Christopher Landon (Happy Death Day, the Paranormal Activity franchise) and prolific horror producer Jason Blum (Halloween, The Purge franchise), comes a horror-comedy about a stalker, a high school senior, and the brutal truth about surviving high school available on Digital on January 26 and on Blu-ray™ and DVD on February 9. FREAKY is “the most purely enjoyable horror movie made in years” (David Sims, THE ATLANTIC). Hailed as “an absolute blast - fun, frantic, horror/comedy mash-up” (Drew Taylor, COLLIDER), the Killer Switch Edition continues the fun and scares with exclusive bonus content including deleted scenes, a behind-the-scenes look at the making of the film and a feature commentary with Co-writer/Director Christopher Landon. 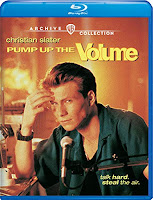 ‘90s Cult Classic, PUMP UP THE VOLUME on Blu-ray from Warner Archive Collection 2/23
By day, Mark Hunter (Christian Slater) is a painfully shy new kid in a small Arizona town. But by night, he’s Hard Harry, the cynical, uncensored DJ of a pirate radio station. Idolized by his high school classmates (who are unaware of his real identity), Harry becomes a hero with his fiercely funny monologues on sex, love, and rock and roll. But when he exposes the corrupt school principal, she calls in the FCC to shut Harry down. An outrageous rebel with a cause, Slater gives a brilliant performance as the reluctant hero who inspires his classmates to find their own voices of rebellion and individuality. A movie with a message, Pump Up the Volume is a raw and witty celebration of free speech that will make you laugh, make you cheer and make you think. 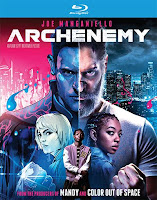 ARCHENEMY on DVD and Blu-ray 2/16
Written and directed by Adam Egypt Mortimer (Daniel Isn’t Real, Some Kind of Hate), ARCHEMENY stars Joe Manganiello (“True Blood”), Skylan Brooks (“Empire”), Zolee Griggs (“Wu-Tang: An American Saga”), Paul Scheer (“Black Monday”), Amy Seimetz (Pet Semetary) and Glenn Howerton (“It’s Always Sunny in Philadelphia”).  In ARCHENEMY, Max Fist (Joe Manganiello) is a local drunk who claims to be a superhero from the planet Chromium. He tells anyone who will listen that he was pulled into a wormhole, falling through time and space, and dropped to earth without any of his powers. No one pays any attention to Max except a teenager named Hamster (Skylan Brooks) who can’t get enough of Max’s stories. When Hamster and his sister (Zolee Griggs) get in trouble with a vicious drug syndicate led by The Manager (Glenn Howerton), Max takes to the streets as a brutal vigilante hellbent on proving himself as the hero no one believes him to be. 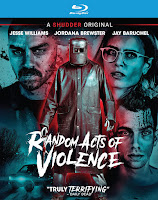 RANDOM ACTS OF VIOLENCE on VOD, Digital HD, DVD 2/16
RANDOM ACTS OF VIOLENCE, based on the comic of the same name by Justin Gray and Jimmy Palmiotti, stars Jesse Williams (“Grey’s Anatomy”), Jordana Brewster (Fast & Furious franchise), Niamh Wilson (Saw franchise) and Jay Baruchel (How to Train Your Dragon 1 & 2). Baruchel also directed and co-wrote the film with Jesse Chabot (Goon: Last of the Enforcers). In RANDOM ACTS OF VIOLENCE, comic book creator Todd Walkley, his wife, assistant and best friend, are heading to NYC Comic Con when bad things start to happen—people start getting killed. It soon becomes clear that a crazed fan is using his “SLASHERMAN” comic as inspiration for the killings. And as the bodies pile up, and Todd’s friends become victims themselves, he is forced to face the killer and put an end to his notorious comic once and for all.
Posted by D.M. Anderson at 11:29 AM