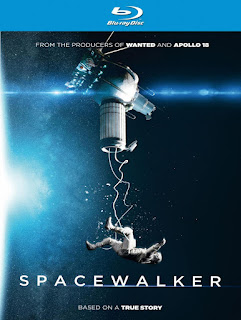 Nice to see that the Russians’ determination to dominate the Space Race was as brash and impetuous as ours. This was back when the only thing really at-stake was bragging rights. Publicly, Russia had a lot to boast about, but as depicted in Spacewalker, some of that success was due to sheer luck. In the effort to accomplish the world’s first spacewalk, many in the government, as well as Cosmonaut Alexei Leonov himself, essentially threw caution to the wind.

Narratively, Spacewalker tells two stories. The first is reminiscent of The Right Stuff, showing the frantic efforts by scientists and politicians to make the mission possible within their self-imposed deadline (i.e. beating the Americans). There’s a lot of trial-and-error, some tragedy and no-small-amount of Leonov’s gung-ho spirit. As performed by Yevgeny Mironov, Leonov is certainly likable, though we don’t learn much about him beyond ambition and patriotism. Same with his partner, Commander Pavel Belyayev (Konstantin Khabensky), who counters Leonov’s enthusiasm by being a constant Debbie Downer.

However, the interest level picks-up considerably during the second story: the mission itself. Bolstered by impressive visual effects, the flight and Leonov’s subsequent spacewalk are depicted with meticulous attention to detail. Like Apollo 13, a few life-threatening complications eventually endanger the mission, adding tension as the narrative juggles between the two Cosmonauts and ground control’s efforts to bring them down safely (and the Kremlin’s efforts to control what’s released to the media).

I don’t know how much of Spacewalker is historically accurate, but Leonov himself was a consultant on the picture and everything feels authentic enough. An overall lack of characterization ultimately makes the film less emotionally engaging than Apollo 13, though it’s certainly bursting with Russian pride. As such, it’s kind-of interesting to see the Space Race from a different point of view.

FEATURETTES - “The First Walk in Space”; “The Story Behind Spacewalker”