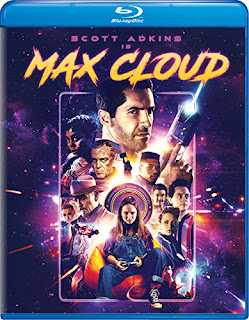 Action star Scott Adkins must have appreciated the chance to (sort of) play against type because he makes the most of it. Sure, he still meets his monthly quota of manly mayhem, but this time in a comedy. Playing the titular character, he broadly parodies the type of granite-jawed, gung-ho space jockeys you see in old video games and B movies. Adkins is clearly having a good time and he’s easily the best part of the film.

Unfortunately, the rest of Max Cloud isn’t worthy of his efforts.

Taking place in 1990, Max turns out to be a character in a 16-bit video game, which is being played by Sarah (Isabelle Allen). After her dad takes her controller away, she wishes out-loud that she could spend all of her time playing video games. Her wish is granted, of course, and is sucked into the game. That’s right, folks...Max Cloud is a low-budget variation of Jumanji.

Sarah’s best friend, Cowboy (Franz Drameh), shows up and is forced to play the game as Jake (Elliot James Langridge) - the secondary character Sarah now inhabits - in order to free her. How he’s able to play after Dad took the controller away is just one example of the film’s narrative laziness. Even less effort is put into its main characters. Sarah and Cowboy display absolutely zero personality traits beyond being skilled gamers, which is ultimately all we learn about Dad, too.

Elsewhere, the “plot” of the game itself has everybody following Max on a molten prison planet run by Revenger (John Hannah), who wants their wrecked ship to exact revenge on the Earth. The film frequently alternates between live action and 16-bit video graphics, the latter of which appears to be used for any scene that would’ve been too expensive otherwise. Adkins’ misplaced dedication to his role is admirable, but aside from a few clever moments poking fun at video game tropes - such as a monster that simply quits attacking whenever Max ducks behind an object - the story is plodding, the laughs are scarce and the action is distressingly routine. Too bad, really. Even though the plot is a road well-traveled, its limited budget is obvious and the ‘90s are an easy satiric target, a little more creative effort could have made Max Cloud a fun little flick. Adkins goes all-in, but it’s not enough to make up for the film’s numerous shortcomings. There are plenty of better movies that cover the same ground.