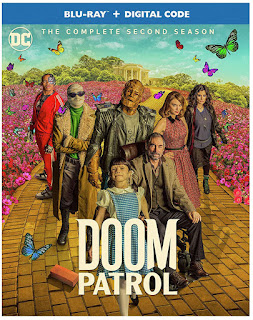 Review by Carl, the Coach Potato😼

I think it’s important to be upfront that I’ve never opened up a single comic book in my entire life. Nor have I ever seen any of the shows in the DC Universe...including the first season of Doom Patrol. So my first takeaway from the nine episodes of season two is that it preaches to the converted.

I’m assuming most of you reading this do not subscribe to HBOMax or DC Universe (where the series is offered) and ended up watching season one on DVD or Blu-ray. If you liked what you saw, snapping-up this set is probably a no-brainer. But if you find yourself in my shoes, season two is like trying to relax with a good book by starting on page 100. Doom Patrol - The Complete Second Season charges full speed ahead, unconcerned with slowing the train down long enough to let new passengers aboard.

Even with countless flashbacks relevant to the current story arc, there’s a lot to unpack here. I was well into the fourth episode before each character’s back-story and overall significance to the narrative began to make sense. The main story thread has an ailing, wheelchair-bound Dr. Niles Caulder (Timothy Dalton) trying to stay alive in order to protect her simian-faced daughter, Dorothy (Abigail Shapiro), who has the unique ability to conjure-up monstrous imaginary friends whenever she wishes. But the good doctor is also fairly reckless and self-serving; most of his efforts to achieve immortality have been through experiments which exploit the abilities of those he shares his mansion with...the various oddballs and freaks who make up the Doom Patrol. Why they haven’t collectively killed him is beyond me.

Personally, I thought some of the various side stories were more interesting, partially because I found Dorothy phenomenally irritating, but also because they’re more-or-less wrapped up in a single episode. Especially amusing was the episode titled “Sex Patrol,” in which a Ghostbusters-like team - called SeX-Men - arrive to rid the mansion of of fornicating spirits, originally brought-on by...well, it’s too bizarre to explain, but rest-assured, it’s funny as hell.

The success or failure of other subplots depends largely on the viewer’s investment in a particular character. To me, ex-pilot Larry Trainor (Matt Bomer), is the most intriguing and his efforts to reconnect with his surviving family - following one son’s suicide - is surprisingly poignant, while Jane’s (Dianne Guerrero) constant struggle against 63 other personalities inhabiting the same body is creatively depicted. On the other hand, foul-mouthed Cyborg Cliff Steele (voiced by Brendan Fraser) is simply obnoxious. He’s like listening to a 10-year-old who just discovered the f-word and the subplots where he’s prominently featured are interminable.

Regardless of its narrative inconsistencies, fluctuating interest level and shockingly abrupt conclusion (in which nothing is actually concluded), there are some aspects of Doom Patrol that are quite impressive. First, this is unarguably the most bizarre series in the entire DC canon. Sure, some of it’s just weird for weirdness’ sake, but there’s also a bit of mad genius behind the ideas and concepts, bolstered by an aesthetic that’s unlike any other series out there. The make-up, production design and visual effects perfectly match whatever tone a particular episode is trying to achieve.

Still, season two of Doom Patrol does little to expand its existing fanbase, apparently content with the audience it already has. I suppose those same fans wouldn’t have it any other way, though I wish I could tell them if season two measures up. That being said, I guess it goes without saying that those curious about what they’ve been missing are highly advised to check out season one first, or risk being hopelessly lost.